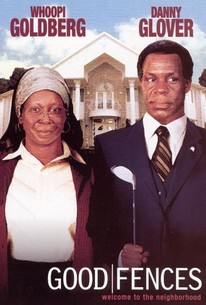 A black family gets a first-hand look at the trials and tribulations of upward mobility and suburban segregation in this pointed comedy. In 1973, Tom (Danny Glover) is an African-American attorney who is determined to raise himself up by his own bootstraps from his position near the bottom of the totem pole at a law firm. Tom takes on a case no one else is willing to touch -- defending a confessed arsonist whose crime claimed the lives of two teenagers -- and when he manages to score a surprising legal victory for his client, Tom is given a promotion and he moves his family to a new home in the suburbs. However, Tom and his wife Mabel (Whoopi Goldberg) discover they're only the second black household to move into the neighborhood (the first was a woman who struck it rich in the lottery), and housewife Mabel soon learns her neighbors aren't especially open to the notion of ethnic diversity in their community. Good Fences was directed by former cinematographer Ernest Dickerson and produced in part by his frequent collaborator Spike Lee; the film was screened in competition at the 2003 Sundance Film Festival.

Stephen Sparks
as Redneck
View All

There are no critic reviews yet for Good Fences. Keep checking Rotten Tomatoes for updates!

An interesting film facing a little addressed problem of rascism of blacks from other blacks.