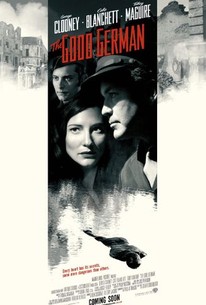 Critics Consensus: Though Steven Soderbergh succeeds in emulating the glossy look of 1940s noirs, The Good German ultimately ends up as a self-conscious exercise in style that forgets to develop compelling characters.

Critics Consensus: Though Steven Soderbergh succeeds in emulating the glossy look of 1940s noirs, The Good German ultimately ends up as a self-conscious exercise in style that forgets to develop compelling characters.

Critic Consensus: Though Steven Soderbergh succeeds in emulating the glossy look of 1940s noirs, The Good German ultimately ends up as a self-conscious exercise in style that forgets to develop compelling characters.

"The Good German" takes place in the ruins of post-WWII Berlin, where U.S. Army war correspondent Jake Geismar becomes embroiled with Lena Brandt, a former lover who is trying to escape her past in the aftermath of the war. Intrigue mounts as Jake tries to uncover the secrets Lena may be hiding in her desperation to get out of Berlin. Tully, a soldier in the American army motor pool assigned to drive Jake around the city, has black market connections that may be Lena's way out--or lead them all into even darker territory.

Gianfranco L'Amore Tordi
as The Butcher

News & Interviews for The Good German

View All The Good German News

Critic Reviews for The Good German

There's a certain distance with which you view the characters, the involvement is not such that they stay with you after the film.

It's Soderbergh's commitment and creativity that lift The Good German above many of its peers, no matter the era.

Why emphasise flaws in a film of such overall ambition and expertise?

This should have been Soderbergh gold. Instead it is mostly unengaging and dull, proof positive that they don't make them like they used to.

A film that feels more like a cinematographer's showreel than an involving drama: flashy, but heartless.

This cast almost makes The Good German watchable. It's just that their screenwriter and director don't do them any favors.

Cate Blanchett's most underrated performance and the best she's looked on screen.

In the finest tradition of some of our most celebrated films of all time, The Good German, is destined to join their ranks as a classic and timeless tale of lies, love, intrigue, political and moral corruption.

A beautifully flawed experiment, "The Good German" is an entertaining if unbalanced war drama that places modern cinema mores on a classic style of American film when the Hayes code would never have allowed such overt sexual reality.

The Good German is the bad movie. Except for the ambience -- the look of the film -- it stumbles awkwardly on every level.

No matter that it's based on a book, the movie is more about how the reality of the time was seen through the lens of a Michael Curtiz while he was filming "Casablanca".

Audience Reviews for The Good German

Soderbergh's visuals are intriguing in this WWII drama, but the story is anything but. Clooney's charisma proves not enough to make the film interesting.

Director Steven Soderbergh's homage to 1940s film noir cinema stays true to the filming methods used back in the day: the camera work, lighting, music, everything. That's a little strange at first, but you gotta admire the tenacity with which this is pulled through from the beginning to the end. As for the plot, it starts out slowly and with what seems to be a rather unlikable character. 20 minutes in a rather unexpected death gets things moving and the film gets more interesting with every minute from then on. Overall, we go through three narrators as we switch perspectives throughout the plot. The acting is great, especially Cate Blanchett seems to have emerged right from that era of cinema. There's even the Casablanca homage in the end. An interesting, even if not overwhelming experience that's pretty entertaining and well done.

In the end, on an airstrip in the rain, it became clear what Soderbergh thought he was doing: making a new Casablanca. And while the "zigzag plot" praised in the film's promotional copy shares this with the classic, no other elements are even comparable. Tobey Maguire is completely miscast, and the film suffers, I think, from a point-of-view problem. Cate Blanchett's character, Lena, is by far the most interesting, and has the most to contribute to the story... so why does the film present itself as being "about" the journalist George Clooney plays? SPOILER COMING The film would have been much more successful had we worked from Lena's point of view. Show us first that Brandt is still allive, then watch her mislead us and the journalist until the end. If she is truly the "good German," then make her the hero. As it is, though, this film is a stinker. The new black-and-white footage was well-yoked to the old newsreel stuff, but that's the nicest thing I can say about it. A lot more than an old-timey score is needed to create tension; primarily, emplotment. This movie just didn't have it, and as a result, Soderbergh's experiment in noir is a colossal failure, and for lack of a better word, flat-out boring.

A serviceman investigates the death of a smuggler who was having an affair with his ex-girlfriend. The story of this film is such a classic noir that all its twists and turns are predictable, bordering on cliche, and director Steven Soderbergh is clearly paying homage to the directors of the early forties, particularly Michael Curtiz. But there's a line where homage meets cliche, and at its few good points -- usually involving a perfectly framed shot of Cate Blanchett in black and white or George Clooney's badly written but well delivered voice over -- The Good German rests on the homage side, but it lives in cliche. The Good German experiment, which is what it seems, makes me wonder if classics are classics because they have a style that one can imitate or if they attain classic status by being perfect expressions of their times. After watching Soderbergh's attempt to cherry pick style of the two options, I have to think that classics are not inimitable, to be appreciated but not duplicated. Overall, I found The Good German interesting only on a theoretical level, but we can talk about film theory without wasting time on this movie.