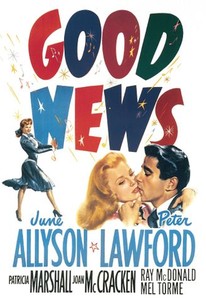 This second film version of the DeSylva/Brown/Henderson Broadway musical Good News may not be the best of the Arthur Freed-produced MGM musicals, but it's certainly one of the peppiest. The film is set at Tait college during the Roaring 20s. The wisp of a plot involves Tait football-star Peter Lawford, who will be ineligible to play in the Big Game if his grades don't improve. June Allyson is the demure Tait coed who takes on the task of tutoring Lawford, while campus vamp Patricia Marshall takes action when she believes (rightly so) that she is losing Lawford to Allyson. The film is deftly stolen by comic relief Joan McCracken, who stops the show with her energetic rendition of "Pass That Peace Pipe"--which, like the famous Lawford/Allyson duet "The French Lesson," was specially written for this 1948 version of Good News. Retained from the original score is the rousing "Varsity Drag." Mel Torme, Tom Dugan and Donald McBride are among the familiar supporting-cast faces in this bubbly Technicolor musical, which was adapted for the screen by Betty Comden and Adolph Green. ~ Hal Erickson, Rovi

[T]he pleasures of reminiscence which the picture affords are worthwhile.

Here, despite the presence of rather over-age students June Allyson and Peter Lawford, Walters injects real verve and genuine joie de vivre into such numbers as Billion Dollar Baby and My Blue Heaven. A real treat for fans of musicals.

Sprightly, colorful and high spirited. Peter Lawford can't carry a tune to save his life but gives a game try, June is full of zest, Joan McCraken a marvel and Connie Gilchrist has an amusing small part. The dance numbers are fantastic.