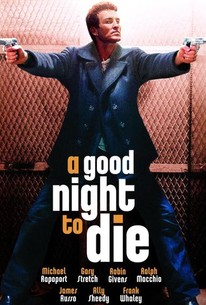 A Good Night to Die Photos

This crime comedy from director Craig Singer is the filmmaker's third independent feature and his second outing with screenwriter Robert Dean Klein and star Gary Stretch, who had contributed to 2001's Dead Dogs Lie, Singer's sophomore effort. Stretch plays Ronnie, a hitman who, three years prior, vouched for his pal and fellow contract killer, August, played by Michael Rapaport (Zebrahead, Mighty Aphrodite). Unfortunately for Ronnie, over the years, August has gotten himself into some trouble and made a few enemies. Now, over the course of one day, Ronnie has to somehow clean up all of August's messes or both men will be facing the consequences of their unhappy bosses. In addition to Frank Whaley and Seymour Cassel, the supporting cast boasts a bevy of 1980s artifacts including Ralph Macchio, Robin Givens, Deborah Harry, and Ally Sheedy. A Cold Day in August screened at Robert De Niro's 2003 Tribeca Film Festival under the title A Good Night to Die.

Critic Reviews for A Good Night to Die

A great movie to miss.

The minor pleasures of A Good Night to Die are offset by its familiarity.

Singer has a nice knack for mixing quirkiness with violence, but hasn't yet mastered how to pull it all together.

Audience Reviews for A Good Night to Die

There are no featured audience reviews yet. Click the link below to see what others say about A Good Night to Die!

A Good Night to Die Quotes