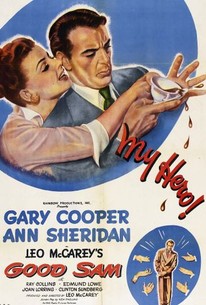 Small-town department store manager Sam Clayton (Gary Cooper) is a born "Good Samaritan", which in his case translates as "sucker." Much to the dismay of his wife Lu (Anne Sheridan), who'd like to save up enough cash for a new house, Sam habitually gives his money away to one "deserving" soul or other. But when Sam himself is in dire financial difficulty, none of the people to whom he's extended his generosity come to his aid. Disillusioned, he goes on a bender and disappears into the night. Thanks to Lu's not-so-gentle remonstrations, however, Sam's debtors finally own up to their obligations, and a happy ending is had by all. Producer/director Leo McCarey has a good thing going in the first few reels of Good Sam, but eventually loses control of the film, resulting in a great deal of illogical plot twists and character transformations in the final footage. Still, it's interesting to watch Gary Cooper doing what amounts to an imitation of Jimmy Stewart. Originally released a 128 minutes, Good Sam was pared down to 114 minutes for reissue. ~ Hal Erickson, Rovi

Florence Auer
as Woman on Bus

The film has several good laughs and no doubt some people will find it amusing and even philosophical. Others will find It episodic, confused and even embarrassing.

Good Sam is a comedy whose central character, played by Gary Cooper, often slows the film's pace because of a languidness and too obviously premeditated performance in a pic that in itself is unusually long.

Good Sam makes agreeable entertainment and is good for a lot of laughs.

Though it's second-tier Leo McCarey fable and not a major star vehicle for Gary Cooper, it's still worth seeing this film

There are no featured audience reviews yet. Click the link below to see what others say about Good Sam!