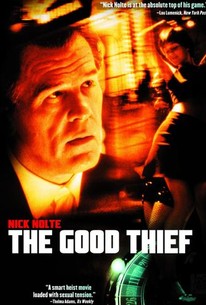 Set against the glitzy backdrop of the French Riviera, aging gambler Bob Montagnet is about to gamble it all on the casino heist of a lifetime; a spectacular sleight of hand--two heists, one real, one not, but which is which? Under the watchful eye of Roger, a policeman who would as soon save his longtime opponent as arrest him, Montagnet assembles a team that consists of partners Paulo and Raoul, technical mastermind Vladimer, former-drug-dealer-turned-informant Said, Anne, a young Eastern girl Montagnet rescued from prostitution, and the perfect complement to a double theft--identical twins Albert and Bertram.

Enzo Iovino
as Croupier
View All

Critic Reviews for The Good Thief

The problems stem from ragged storytelling, a surfeit of silly epigrams and a jangle of accents and cultures that leaves you wondering where Mr. Nolte's strangulated crook fits in.

The Good Thief is worth seeing, if only for Nolte's turn as the loveable de-toxing rogue.

While Jordan's repeated freeze-frames try a little too hard for nonchalance, the overall cocktail of Gallic insouciance and American film noir grit delivers such relaxant properties you forgive a few foibles.

Discount its distinctly casual approach to the mechanics of a multi-million Euro robbery, and it's not bad at all.

Mr. Jordan has lovingly recreated much of what glittered in the hard French thrillers that once starred Delon and Belmondo, and provided a superbly customized vehicle for the salty charms of ashtray-voiced Nick Nolte.

Great fun despite its deficiency as a presumed thriller.

A faithful remake, a spirited updating, and a deft, colorful, thoroughly entertaining heist film swimming in character and atmosphere, Neil Jordan's The Good Thief (2002)... may not be his best film, but it is one of his most purely enjoyable.

The best and most enjoyable English-language crime picture since Jackie Brown.

When it comes to movies about one last, high-stakes score, Nolte in The Good Thief pales next to Gene Hackman's low-keyed brilliance in Heist.

Audience Reviews for The Good Thief

A movie that tried really hard for the "cool" factor, complete with a "cool" french soundtrack. It's a decent watch. It may have been much better with a better lead? I wasn't buying the suave gambler/thief played by Nick Nolte..but that's just me, maybe. I'm not really a fan.

while the story was solid and the end was very good, the script was awful, the acting sub par, and the directing by niel jordan distractingly bad. some give and some take makes for an average film. great semi-cameo by ralph fiennes.

A stylish, tense, sexy and electrifying crime thriller. Explosive, smart, bold, funny and exciting. Nick Nolte has never been better. Gives his best performance in years. He just gets better as the years go on showing impressive and undeniable star power. A great cast of actors. Ralph Fiennes and Tchecky Kayrow turn in great performances. An totally enjoyable flick. A excellemt movie. It's one of those rare pieces of film noir that makes for good entertainment pleasure. A smooth, character-driven and absolutely exhilerating flick.

I prefer this over Bob La Flambeur.