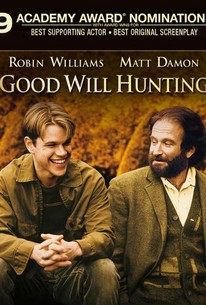 Critics Consensus: It follows a predictable narrative arc, but Good Will Hunting adds enough quirks to the journey -- and is loaded with enough powerful performances -- that it remains an entertaining, emotionally rich drama.

Critics Consensus: It follows a predictable narrative arc, but Good Will Hunting adds enough quirks to the journey -- and is loaded with enough powerful performances -- that it remains an entertaining, emotionally rich drama.

Critic Consensus: It follows a predictable narrative arc, but Good Will Hunting adds enough quirks to the journey -- and is loaded with enough powerful performances -- that it remains an entertaining, emotionally rich drama.

The most brilliant mind at America's top university isn't a student, he's the kid who cleans the floors. Will Hunting is a headstrong, working-class genius who is failing the lessons of life. After one too many run-ins with the law, Will's last chance is a psychology professor, who might be the only man who can reach him. Finally forced to deal with his past, Will discovers that the only one holding him back is himself.

Matt Damon
as Will Hunting

Matt Mercier
as Barbershop Quartet No. 1

Bob Lynds
as Barbershop Quartet No. 3

Dan Washington
as Barbershop Quartet No. 4

Shannon Egleson
as Girl on Street

Steven Kozlowski
as Carmine Friend No. 1

Frank T. Nakashima
as Executive No. 1

Christopher Britton
as Executive No. 2

David Eisner
as Executive No. 3

News & Interviews for Good Will Hunting

View All Good Will Hunting News

Critic Reviews for Good Will Hunting

The headline story from this slice of honestly earned sentiment is Matt Damon, who delivers the year's No. 1 breakthrough performance directly atop his agreeable high-profile turn in John Grisham's The Rainmaker.

It's a movie that captures (in a way that perhaps an older screenwriter could not convey) the limitless possibilities of youth, a movie in which a character can tell another, without cynicism, "You could do anything you want. You are bound by nothing."

The best thing about Good Will Hunting is not in its well-crafted, psychological symmetries but in the just-plain messiness of its humanity. It's rowdy, it's funny, it's heartbreaking -- it rings of life.

A crowd-pleaser, with bags of charm to spare.

Towering performance by Matt Damon as a troubled working class who needs to address his creative genius elevates this drama way above its therapeutic approach, resulting in a zeitgeist film that may touch chord with young viewers the way The Graduate did

It's writer-stars Matt Damon & Ben Affleck's childhood friendship-chemistry and the hilarious bickering between the real-life Affleck brothers that generates the magic in "Good Will Hunting." Not to mention a magical performance by Robin Williams.

While Damon and Affleck clearly feel at home with each other in familiar surroundings during Good Will Hunting, their story relies on heart more than location since caring and friendship taking precedence.

Good Will Hunting still holds up as a great film.

What Matt Damon and Ben Affleck accomplish with such a profound, witty, inspirational and heartbreaking script is quite extraordinary. And then, Mr. Robin Williams takes it to another level. [Full review in Spanish]

On the surface there doesn't seem to be too much going on, but dig a little deeper and you'll find remarkably telling insights into the mind games that go with being a genius.

Audience Reviews for Good Will Hunting

A heartfelt and deeply honest drama with great performances and an excellent script written by Matt Damon and Ben Affleck that doesn't even let us notice how attached to the characters we become - and I guess we can all forgive it for that sentimental "it's not your fault" scene.

Starts off strong but lags towards the end

An original story concerning a janitor (Matt Damon) who works at MIT, before he is discovered by an arrogant professor (Stellan Skarsgard) after he solves a theorem only a handful of people in the world can figure out. This leads to an unstable but always interesting partnership of the two, which eventually develops into a raw relationship between the young man and the professor's former roommate (Robin Williams), who is a psychiatrist. This is a very well done film, due in large part to the screenplay, which is simply sensational, as well as the overall solid acting, led by Damon, Driver, and the always versatile Williams. Van Sant does an outstanding job capturing the atmosphere of Boston, and implements this backdrop into a tale of human emotion and uncovering brilliance in the most unlikely of situations.

Brilliant, engaging drama, Good Will Hunting is a near perfect work of drama that boasts impressive performances, direction and a great story. The cast here is well chosen, and the film is terrific in the way that it tells a powerful, memorable story. The script which was written by Affleck and Matt Damon is a terrific piece of writing, and the result shows on-screen, as this is a picture that is sure to grab your attention from start to finish due to its energetic story and intricate performances that really stand out. Good Will Hunting is an accomplished drama, a picture that is sure to appeal to any viewer that enjoys a well crafted work of drama, Gus Van Sant's direction is terrific as well, and he delivers one of his finest films. Robin Williams is also a noteworthy cast member and he can definitely a dramatic role, which really shows off his range, and he did that so well in Dead Poets Society and he would later deliver a blistering, tense performance in One Hour Photo. Here, he is stunning, and opposite Damon, steals the show. Matt Damon would make other stunning picture, but here, he takes on a great role, one that is conflicted, and well fleshed out, and Matt Damon really brings that to light here. He brings out the best out of the character, and he is perfect for the part. With a great script, great cast, and effective, immaculate direction, Good Will Hunting is a stunning picture, one that is thoroughly engaging from start to finish, and it is a highly captivating picture that you won't forget. This is the type of picture that sticks with you long after you've seen, and it's also a film well worth revisiting again and again. The film also showcased the writing talents of Ben Affleck and Matt Damon, of which Affleck would later write some stunning films such as The Town and Argo, but here, this was a script he wrote when his career was taking off, and it's great to see that he showed terrific writing skills when his career was taking off. Good Will Hunting is a terrific picture, one that is well worth your time.