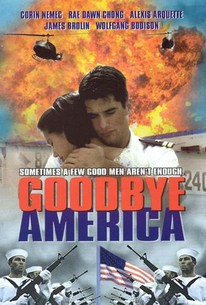 Taking a sharp look at the political and social effects American military presence has had upon the Philippines, this thriller is set in 1992 as the U.S. Navy was in the process of closing its large base at Subic Bay, an action that has serious ramifications for the local economy. The story centers on a trio of Navy SEALS, each of whom are involved with island women. Hawk is an idealist while the amiable Bladon is the son of a U.S. senator and is deeply in love with a prostitute. The increasingly mentally unbalanced Stryzack is the loose cannon of the three. A devoted Navy man committed to honor and the warrior mentality, he is deeply upset by the military's withdrawal.

There are no critic reviews yet for Goodbye America. Keep checking Rotten Tomatoes for updates!

There are no featured audience reviews yet. Click the link below to see what others say about Goodbye America!