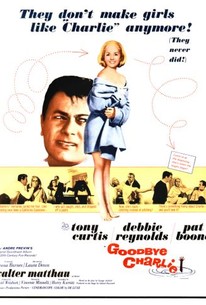 George Axelrod's Goodbye Charlie flopped on Broadway with Lauren Bacall in the lead, but fared a little better as a film vehicle for Debbie Reynolds. Charlie (Harry Madden) is an inveterate philanderer who is shot dead by jealous husband Walter Matthau. Through a celestial fluke, Charlie's soul enters the well-rounded body of Debbie Reynolds. In this form, Charlie/Debbie seeks to settle old scores with her murderer as well as several other enemies. As if these aren't complications enough, Charlie's best friend Tony Curtis falls in love with Debbie, knowing full well that Debbie isn't really Debbie. If you liked Goodbye Charlie once, you'll love it twice: Blake Edwards retooled the whole megillah for Ellen Barkin, added a trendy feminist underlining, and came up with Switch (1991).

Michael Jackson
as Himself

Donna Michelle
as Guest on Yacht

Rudy Hansen
as Germans in Bistro

Ed Wermer
as Germans in Bistro

Minnelli, whose work brings together an extraordinary set of themes, looks at the violence and the lust of Hollywood, the riotous pleasure-seeking of its players big and small.

Under Vincente Minnelli's direction, the film has a certain style and pace. But it is much more vulgar than stylish, much more sluggish and dull than fast.

Even by delving into fantasy for its wildly implausible premise this picturization of George Axelrod's not-so-successful 1960 Broadway play doesn't come off as anything but the mildest type of entertainment.

Both Miss Reynolds and Tony Curtis behave gamely, but Goodbye Charlie is one of those games that will never be won.

Funny but far-fetched entertainment from director Minnelli, who doesn't need to rely on strange plot devices to make a good movie.

Minnelli wanted Marilyn Monroe for the lead, and indeed Debbie Reynolds is doing too much in this comedy about gender reversal and transgressive conduct, though Tony Curtis has some good moments

Cinema great Vincent Minnelli directed this light appetizer about gender swapping. Within the early 1960's Hollywood community infidelity is rampant and no one is faulting one hack screenwriter Charlie Sorel, until a jealous husband (Walter Matthau, playing a Hungarian continental type playboy) catches him in the act and shoots him. Dead. Sorel's bestie (Tony Curtis) is surprised then when his life long buddy shows up again, reincarnated. As Debbie Reynolds. She's pretty good, too.

At times tasteless but generally breezy gender switching comedy and certainly better than the awful remake "Switch". Debbie is glamorous and ribald, Tony suitably exasperated and its interesting to see Ellen Burstyn this early in her career.