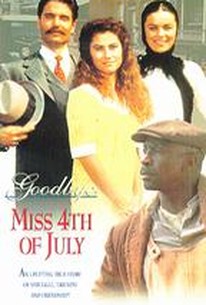 Based on a true story, Disney's made-for-television film Goodbye, Miss 4th of July is about the daughter of Greek immigrants in pre-World War II West Virginia. The girl and her family befriend an elderly, ailing former boxer, who happens to be African-American. The boxer and the family are forced to battle the racism of their community during the first half of the film, while the second half concerns an influenza epidemic.

Tim A. Powell
as Ben Cotter

There are no critic reviews yet for Goodbye, Miss 4th of July. Keep checking Rotten Tomatoes for updates!

There are no featured reviews for Goodbye, Miss 4th of July at this time.