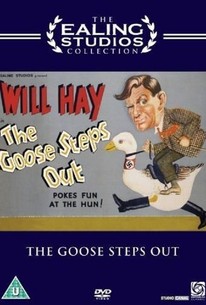 The Goose Steps Out Photos

Future action-film expert Basil Dearden cut his directorial teeth on The Goose Steps Out, a wartime espionage comedy. The star (and co-director) is Will Hay, a major British comedian of the era whose stock in trade was playing pompous, inefficient schoolmasters. This time Hay and his confederates cross the path of a gang of Nazi spies, operating covertly in London. Using his wits (such as they are), Hay collars the Nazis and preserves the Empire. The popularity of Will Hay did not extend to American audiences, who couldn't see anything funny in such a pathetic character, but The Goose Steps Out was a big moneyspinner in Britain. The film also served as the screen debut of 20-year-old Peter Ustinov.

Will Hay
as William Potts / Muller

Victor Weske
as SS Officer on train
View All

Critic Reviews for The Goose Steps Out

The film is inclined to be patchy, but is reasonably good fast fun all the same.

There are no featured reviews for The Goose Steps Out at this time.

The Goose Steps Out Quotes