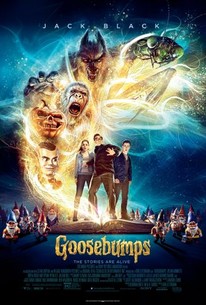 Critics Consensus: Goosebumps boasts more than enough of its spooky source material's kid-friendly charm to make up for some slightly scattershot humor and a hurried pace.

Critics Consensus: Goosebumps boasts more than enough of its spooky source material's kid-friendly charm to make up for some slightly scattershot humor and a hurried pace.

Critic Consensus: Goosebumps boasts more than enough of its spooky source material's kid-friendly charm to make up for some slightly scattershot humor and a hurried pace.

Upset about moving from a big city to a small town, teenager Zach Cooper (Dylan Minnette) finds a silver lining when he meets the beautiful girl, Hannah (Odeya Rush), living right next door. But every silver lining has a cloud, and Zach's comes when he learns that Hannah has a mysterious dad who is revealed to be R. L. Stine (Jack Black), the author of the bestselling Goosebumps series. It turns out that there is a reason why Stine is so strange... he is a prisoner of his own imagination - the monsters that his books made famous are real, and Stine protects his readers by keeping them locked up in their books. When Zach unintentionally unleashes the monsters from their manuscripts and they begin to terrorize the town, it's suddenly up to Stine, Zach, and Hannah to get all of them back in the books where they belong. Note: Scholastic has sold over 400 million Goosebumps books worldwide in 32 languages since the series introduction in 1992, earning critical acclaim and dominating global best seller lists. R.L. Stine has been recognized as one of the bestselling children's authors in history. (c) Sony

Jason A. Davis
as Cyclist (uncredited)

Everett Dixon
as Monster #7
View All

The triumvirate of young actors are charming but, inevitably, it's Mr Black who steals the show with his patented, hilarious bellowing. Will today's creepypasta kids still enjoy such silly fireside supernaturalism? We do hope so.

Black is in good form as the enigmatic Stine, but it is Minnette as Zach who impresses most.

For the most part, the story sticks to a predictable narrative.

Goosebumps combines cynicism with sweetness. If you can get past the slow start, woefully blank hero Zach (Dylan Minnette), and hit-and-miss special effects, you'll be charmed.

It's a little scrappy, but there's more than enough carnivalesque mayhem to keep monster fans young and old diverted.

This teen horror fantasy (based on RL Stine's bestselling children's books) is made with an anarchic glee that, in its better moments, rekindles memories of Joe Dante's zany, tongue-in-cheek movies of the 1980s.

Will tickle your funny-bone more than raise any actual goosebumps, but it's a fun throwback to the kind of teenage thriller best enjoyed at a Saturday afternoon matinee movie with a large box of popcorn and a Coke.

Better than you think it's going to be, but it also doesn't quite live up to the nostalgic glory.

If you're looking for a light-hearted movie with a bit of bite, or something to entertain your children that won't melt your brain, this is it. A very pleasant surprise.

Goosebumps is a movie you can watch with the kids and not be mad; you'll have a good time.

It is an effective family hobby that knows how to create a story around the universe of the saga created by R.L. Stine, but finding its own voice. [Full Review in Spanish]

Jack Black coyly channels an effete Stephen King as a horror writer for tweens with a secret: all of his creations come to life when exposed to air. What follows next is one extended chase scene, one comic set piece to the next, with plenty of lightweight puns to frighten any hint of boredom your younglings might harbor. You crack open up the vino and cheese.

Based on the hugely popular anthology horror literature, Goosebumps is a jubilantly redoubtable, sprightly adaptation that pays homage to Gremlins (the lawn gnomes could rival those mischievous sprites for mayhem and their wholesale massacre via garbage disposal, oven and finally bear traps) and Ghostbusters for family-friendly frights. Jack Black is effectively antisocial as the nom de plume Stine who is reclusive because of his animosity towards the outside world. His competitive nature with Stephen King is mockingly jabbed ("Yes, 400-million copies worldwide. It's still very impressive."). However, Tenacious D songbird Black fires on all cylinders in his cackling vocal performance as Slappy, the malevolent ventriloquist dummy. He imports the sinister intonations of Brad Dourif's Chucky for Slappy. My biggest criticism for the film is a technical one. The interaction between Zach Cooper (Dylan Minnette) and company with the hulking creature is unconvincingly rendered. It's either a mouth-agape reaction shot or slapstick pratfalls with the critters and they don't intersect in the same frame often enough to preserve the corporeal illusion. Ala Chris Pine, Minnette is a witty lead who lobs off acerbic one-liners like a breadcrumb trail of sarcasm ("My mom asked me where in the whole world I would like to move and I said Madison, Delaware"). It's a laudable compliment if people mistake Tim Burton for the helmsman instead of Rob Letterman because of the blustery score by Danny Elfman, the alienated-outsider storyline and the effortless mingling of gallows humor. In a clever cameo, the real Stine glides through the frame as Mr. Black, the drama teacher. It's not too hair-raising for kids and it's not too puerile for adults, Goosebumps wiggles into the sweet spot for multi-generational entertainment.

Dumb, fun, smart, and helming a surprising emotional heft, "Goosebumps" is more enjoyable than I would have ever thought. Lead by Dylan Minnette (Zach), a teenager moves into the house next door to Author R.L. Stein, and after coming across the manuscripts of the "Goosebumps" novels, the creatures are unleashed unto the town. Although there are some pretty terrible moments of dialogue, the film makes up for it by being self-aware of it's story and embracing the silliness that ensues throughout the picture. For kids, this is a perfect film. For adults, not so much. I was able to watch this with an open mind and I can wholeheartedly say that I had a blast. Jack Black, Dylan Minnette, Ryan Lee, and Odeya Rush all work very well together. Is this a film that was screaming to be made, no, but is it harmless fun? Yes. "Goosebumps" is definitely a great family film for the Halloween season. Not too scary for kids, but not too tame for the adults either. This is a fun ride that you can find at least some enjoyment with. Overall, I had a lot of fun with it!