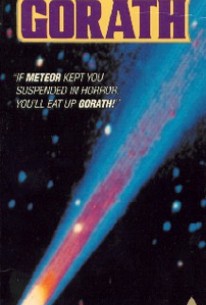 Japanese sci-fi director Inoshiro Honda and special effects wizard Eiji Tsuburaya teamed up again (Rodan, Godzilla, Mothra) for this thriller/adventure. Set in the futuristic 1980, a group of Tokyo scientists discover that Earth is in the direct path of a star with a gravitational pull 6,000 times than that of Earth's. As a space ship finds itself close to the orb, its team of astronauts are able to transmit important information to Ground Control. Collaborating with other specialists from various nations, the scientists frantically attempt to save the world from a catastrophic collision. Running at only 77 minutes, this version omits the original--and bizarre--Japanese ending wherein a gargantuan walrus emerges from the cracked glaciers of the South Pole.

Haruo Nakajima
as Magma, The Giant Walrus (Cut out of non-Japanese Prin

Akira Nishimura
as Secretary of the Space Agency Murata

There are no critic reviews yet for Gorath. Keep checking Rotten Tomatoes for updates!

There are no featured reviews for Gorath at this time.