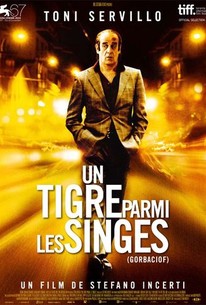 Temptation gets the better of a morally flexible man in this drama from director Stefano Incerti. Marino Pacileo (Toni Servillo) is known to most of his friends and acquaintances as "Gorbaciof," thanks to he large red birthmark on his forehead that resembles the one belonging to former Soviet leader Mikhail Gorbachev. Gorbaciof works as a cashier at the Poggioreale prison in Naples; he's used to handling large amounts of cash every day, which has a certain allure for a man with a taste for gambling. Gorbaciof likes to play cards, and begins frequenting a high-stakes poker game regularly staged by the proprietor of a Chinese restaurant (Hal Yamanouchi). Gorbaciof soon finds himself falling for the restaurateur's daughter Lila (Mi Yang), and when her dad runs into financial trouble, Gorbaciof is willing to help. However, Lila's father needs more money than Gorbaciof has on hand, so he begins skimming funds from the cashbox at work, leading him down a treacherous path. Toni Servillo's performance in Gorbaciof earned him the best actor award at the 2011 Bastia Italian Film Festival.

There are no critic reviews yet for Gorbaciof. Keep checking Rotten Tomatoes for updates!

There are no featured reviews for Gorbaciof at this time.