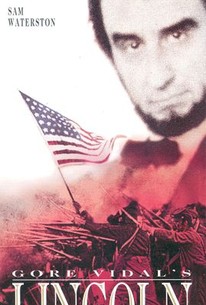 Originally telecast in two parts on March 27 and 28 of 1988, Lincoln was adapted from the bestselling "factual fiction" by Gore Vidal. Sam Waterston stars as Abraham Lincoln, with Mary Tyler Moore frighteningly convincing as the tragic Mary Todd Lincoln. Predictably, Part One of Lincoln deals with the inauguration, the outbreak of War, and the president's tiltings with his cabinet, while Part Two includes the Emancipation Proclamation, the appointment of General Grant (James Gammon), and the assassination. The throughline of the script is the deteriorating mental condition of Mary Lincoln, not to mention her injurious impulsiveness: at one point, Honest Abe must cover up the fact that Mary has stolen a copy of his inaugural speech and sold it. Evidently, the name of Gore Vidal was not considered enough of a drawing card by the NBC publicists, who insisted upon advertising Lincoln as the second coming of Gone With the Wind, adding the teaser tagline "The Untold Story."

Roy Butler
as So. Congressman #3

Tom Mason
as So. Congressman #1

There are no critic reviews yet for Gore Vidal's 'Lincoln'. Keep checking Rotten Tomatoes for updates!

There are no featured audience reviews yet. Click the link below to see what others say about Gore Vidal's 'Lincoln'!