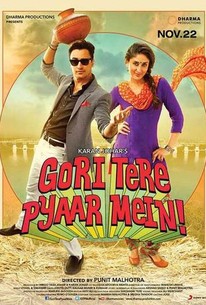 Sriram Venkat (Imran Khan) is the most shallow guy on earth who doesn't value relationships, family, friends, life or the country. Not necessarily in that order. Because he couldn't care less about the order. This makes him the clear 'black' sheep of the family. At some point this shallow man begins to narrate the story of the crazy relationship he shared with Dia Sharma (Kareena Kapoor). His ex girlfriend. A firebrand social activist who wanted to change the world. An attraction which was physical initially but then got emotional and finally veered into complex territories resulting in a clash of ideologies and mindsets which drove them apart. Bitterly. Sriram believed that charity begins and ends at home. Whilst Dia felt that you have to be the change that you want to bring about. However Sriram realizes that he is not over Dia and still loves her and that she is the best change that ever happened... and will happen to his life. (C) Reliance

The narrative becomes melodramatic and even more synthetic as Punit tries to inject emotion and a sense of nobility that hasn't been earned.

Even its formulaic elements are as comforting as a hot, steaming cup of masala tea.

The falseness of the exaggerated romantic comedy sequences here infect the aspects of the story that should be underplayed and gentle, as they were in "Swades."

Instead of one satisfyingly complex film, it's two or three films in one, a turducken of comedies.

Avoid at all costs.

Madhureeta Mukherjee
The Times of India

Nothing earth shattering here. No promise of rewriting cinema history. This movie is just a pleasant no frills family entertainer.

Malholtra has clearly left his actors to their own devices and his leading lady offers up enough hair tosses, lippy pouts and come hither glances for a dozen films.

There are no featured reviews for Gori Tere Pyaar Mein at this time.