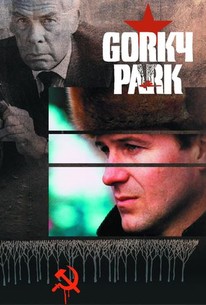 In the dead of a Moscow winter, three bodies are found in Gorky Park. Police Inspector Renko (William Hurt) is unable to identify the corpses, since even their fingerprints have removed. For reasons unknown to him, Renko's investigation is somehow being stymied by his higher-ups. Ferreting out information on his own, Renko makes the acquaintance of Soviet dissident Irina (Joanna Pacula), a friend of one of the victims, and Lee Marvin as Armand Hammer-style American businessman. As in Martin Cruz Smith's novel, the identity of the killer is not as well hidden as the reasons behind the killing. "Glasnost" had not yet taken effect in 1983, thus Gorky Park was filmed in Finland rather than Russia.

William Hurt is superb as a Moscow militia detective caught between his desires to be simply a good cop and the unfathomable motives of the secret Soviet government, all complicated by an unexpected love for Joanna Pacula.

Neither Dennis Potter's screenplay nor the heavyweight cast can raise this adaptation of Martin Cruz Smith's best-selling spy novel above the ordinary.

By the end of Gorky Park, we realize that it's not the solution that matters, but what the case itself forced the people to discover about themselves.

It remains a taut, clever thriller throughout, with Mr. Apted's direction establishing its intensity immediately and sustaining it well.

Some action-movie slam-bang would have been more satisfying, if ultimately no more coherent.

Has its wintry moments in the snow.

The Cold War intrigue works better than the murder-mystery angle.

A cast worth seeing no matter who's helming the project.

It's all so naive that not even the final confusion adds any greater substance. [Full Review in Spanish]

Gorky Park is well done and unique amid the films of its day. While certainly made with the Cold War as its backdrop, the film never resorts to the Cold War clichés of the time.

An uneven but fascinating murder mystery.

Hopelessly dated and morose -- and much is lost from the bestselling novel.

Very average. It works but there's nothing to get excited about.

I was completely intrigued by the synopsis of this one, but fairly disappointed with the film. Many boring bits throughout, but one you want to stick with to find out the outcome. It wasn't all bad, the plot was a pretty interesting one, just far too drawn out.

When three mutilated bodies are found in Moscow's Gorky Park, Chief Militia Renko suspects KGB involvement and wants to drop the case. Encouraged to continue by his superior, his suspicions are eventually confirmed but he uncovers a larger plot involving the friend of one of the victims and an American furrier who trades in rare sable pelts. This is my favourite Cold War thriller - despite the fact that it's got nothing to do with the Cold War - based on a great book by Martin Cruz Smith filled with action and intrigue and with a first-rate script by Dennis Potter, bursting with dramatic tension and character nuance. Its best feature is the marvellous casting by Mary Selway; Hurt is sensational as Renko, a brilliantly atypical hero, gaunt and pale-faced, dogged and relentless, drab but passionate, double-crossed and always on the receiving end of beatings, but indefatigable in his pursuit. He's supported by three great actors; the elfin, amazing-looking Pacula as the key witness Irina, the solid, ever-reliable Dennehy as a New York cop whose brother was one of the victims, and the iconic Marvin, in one of his last great roles, as the decadent furrier out to smash the Russian sable monopoly. The all-British supporting cast is equally full of great players, notably McDiarmid as a creepy professor and comedians Fulton and Sayle as a KGB Major and informant respectively. Made prior to the lifting of the ban on filming in Russia, the movie was shot in Helsinki, but Paul Sylbert's production design does a fantastic job of putting us in snowy Moscow, filled with food- lines, little Lada cars and Romanov architecture. Even better is James Horner's fabulous driving score, which ramps up the tension and batters the viewer into submission at all the key moments. Filled with quotable dialogue (when Renko borrows his lawyer friend's gun, the friend says, "It's a lawyer's special issue. It probably won't shoot straight."), great scenes, rich characters and mesmerising performances, this a superb thriller from the sporadically-brilliant Apted (check out his Continental Divide and Gorillas In The Mist as well) that is not to be missed.

Very typical 80s British slow-burn crime thriller, with the Moscow setting and Russian characters just a gimmick. It was filmed in Helsinki, and the protagonist would've made a perfect James Bond, watch it for 80s nostalgia rather than Russian culture.