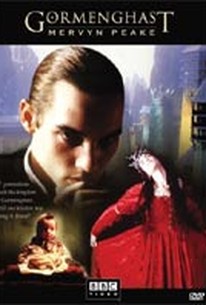 The ancient family of Groan has been incarcerated for centuries in the vast crumbling castle of Gormenghast. The dynasty is threatened by the charismatic Steerpike who escapes his destiny as a kitchen boy. As Steerpike charms and outwits the eccentric inhabitants into submission, including the beautiful Fuchsia, only Titus, stands in his way. The Young Earl and his pretender fight a bloody duel against the fantastic backdrop of the disintegrating castle. Who will emerge the victor and what secrets will they discover? -- © 2000 BBC

Lynsey Baxter
as Cora
View All

I am increasingly surprised and sorry that Gormenghast was not animated rather than acted. It might have been magical.

Considering this is the first adaptation of Peake's work, and given the magnitude of the production, it will most likely remain the definitive version.

This sumptuous vision looks great, serves up plenty that's pleasing, and although is somewhat flat is not bad. It does, though, take Peake's extraordinary achievement and makes it, well, ordinary.

There are no featured audience reviews yet. Click the link below to see what others say about Gormenghast!