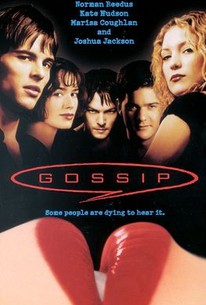 Critics Consensus: Gossip drags on far beyond its entertainment value.

Critics Consensus: Gossip drags on far beyond its entertainment value.

Critic Consensus: Gossip drags on far beyond its entertainment value.

The blurry line between a rumor and the truth is stretched to the breaking point in this drama. Three arrogant and self-centered college students, Jones (Lena Headey), Derek (James Marsden), and Travis (Norman Reedus), are brought together for a class project, in which they decide to start a rumor and keep track of how it spreads. Looking for possible gossip material, they see Naomi (Kate Hudson), a girl known for her high-minded views on saving sex for marriage, drunkenly making out with Bo (Joshua Jackson) at a party. The three students begin passing around the rumor that Naomi became a victim of date rape later that evening, embroidering the truth with allegations that Bo forcibly seduced Naomi after she was too inebriated to put up a fight. Before long, the rumor makes its way back to Naomi herself, who suffered a black-out on the night in question after too much alcohol. Naomi panics, and convinced that the rumor is true, contacts the police, who assign Detective Kelly (Sharon Lawrence) to investigate the charges of rape filed against Bo. Featuring a cast of young actors best known for their work on television, Gossip was an appropriate first feature film for director Davis Guggenheim, who previously distinguished himself on such TV series as ER, NYPD Blue, and Party of Five.

John Wills Martin
as The Stranger

Predictable at every turn, glossy but stagy, and full of unengaging, underdeveloped characters, Gossip too is 'all just words'.

A taut second half in which the plot turns back on itself in some surprising twists makes up for the lethargic first half.

All style and no substance.

Gossip seems to have been written by a program that selects elements from favorite music videos and girl-in-peril tele-movies to make one perfectly off-the-charts ridiculous film.

The movie feels longer than its 90 minutes.

Gossip is like one of those flashy, cutting-edge magazines -- it looks cool but it's no fun to read.

Replace the flip phones with iPhones, the word-of-mouth hallway gossip with retweets, and the salacious storyline could work just as well for today's audience.

Anyone who needs to sit through this movie to understand gossip is wrong probably can't be helped.

Though it is reasonably effective as a morality tale on the dangers of spreading a rumor, it is even more pertinent to the perils of burying a worthy screenplay under layers of big-budget gloss.

Shallow Grave by way of Cruel Intentions, a breezy, entertaining mind-twister in which things spiral out of control for lots of good-looking kids and various alliances and narrative trap doors keep the audience enjoyably guessing as to who's

Takes you on a smart and sassy roller coaster ride.

Insufferable (and interminable) in-joke of a roundelay.

Trashy, but good. Slick looking 90's film with a mostly unlikeable set of characters and a few twists and lies. Kate Hudson is good, but Marisa Coughlan steals every scene she is in. It's surprising she never became more popular as an actress.

The second half is a lot more interesting than the first. It is one of those movies where I was beginning to suspect the ending way before it showed itself, but when it happened, it was unbelievable.

The great concept of GOSSIP nearly got killed by a weak execution, poor performances and a juvenile, lightweight plot that tries to pass as dense. Nevertheless, it doesn't fail completely. I may be biased, but James Marsden's performance as evil Derrick Webb is quite amazing. Add an impressive soundtrack by Graeme Revell and an incredible twist ending, and you almost forget everything this flawed little film did wrong. Almost.

Well pretty surprised with thiss movie ! the storyline really is clever and exciting and brilliant but the directer and prodcer did thi smovie no justice there wasnt a lot of suspense and pretty predictable ! this movie culd of and should of been better but i stiill really enjoyed it and it is worth a watch! Three students spread a rumour to see how fast it travels and how much it changes but what starts as a simple little lie escalates to a full blown witch hunt as the rumour is turning into a criminal act and then lies of llies are told so who are you going to trust and believe A nice little thriller with a lot of potential but we'll just have to stick with this worth a watch!!