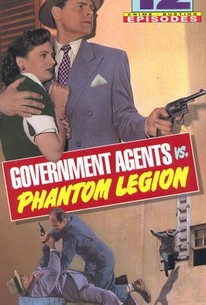 Walter Reed, who also starred in Flying Disc Man from Mars that year, played a government agent looking into a series of truck hijackings in this Republic Pictures action serial. The hijackers are after critical Government material and are led by "The Voice," one of those mystery men so popular in serials. Reed quickly realizes that "The Voice" is one of the four members of the Interstate Truck Owners' Association, but which one?

Dick Curtis
as Regan
View All

There are no critic reviews yet for Government Agents vs. Phantom Legion. Keep checking Rotten Tomatoes for updates!

There are no featured reviews for Government Agents vs. Phantom Legion at this time.