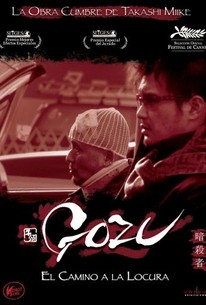 Minami, a young yakuza, is asked by his gang boss to kill Ozaki, a soldier within the organization who has become a liability, but who once saved Minami's life. The resulting crisis of loyalty plunges Minami into a new and unfamiliar world.

Ryo Ishibashi
as Boss
View All

For Miike freaks only (and you know who you are). Everyone else: Stay far, far away.

There is something compelling about the way this film sneakily taps into our collective psychosexual fantasies.

I don't think this is quite the film with which to begin a Miike investigation.

Makes little sense on paper. As a film, however, it somehow feels richly, hilariously real, even -- at its most bizarre -- familiar.

A film that parlays the hoary clichés of the yakuza film into a stunningly surrealistic exercise in cinematic madness.

My advice is to eat before you. Gozu, much like its director, is a cinematic law unto itself.

Gozu takes you on a very strange psychosexual journey, which is all the more disturbing because it takes place in completely ordinary surroundings...

Many times it's just a rambling and incoherent mess without a point in sight...

Beat's back, with another Yakuza flick under his (black?) belt.

Anyone in the mood for a gender-bending yakuza comedy/horror film and who doesn't mind seeing a lot of bodily fluids spewing onto the screen ought to give Gozu a whirl.

Watching Gozu reminded me a lot of Eraserhead in that both films nearly abandon plot all together to make way for their respective bizarre scenes and surrealistic atmosphere. But this isn't classical Dali or Bunuel type surrealism, which focused a lot on style and subverting conventions, this is more of the Jorodowsky variety: start with a blank canvas, disregard narrative logic all together, and let your imagination run wild. Gozu may be the most peculiar and surreal film in Miike's canon. If you know anything about his work, that's saying quite a bit.

Takashi Miike is a very strange man - I think there's sufficient evidence of that fact that I need not justify it further. So if I tell you that GOZU is probably Miike's weirdest film to date, you will know that we are talking some world-class oddity. Billed as a "Yakuza Horror" film, which is a label that just about fits if you consider that Japanese horror films have always shown a very different sensibility than Hollywood films (Japanese horror is generally of a quite intangible nature, about the horror of the unknown and the incomprehensible - not so much about the big scary monsters). GOZU is interesting in that the "horror" of it comes almost entirely from the way it is filmed - the camera work, the editing and the sound effects all come together to create a sense of foreboding and fear that for the most part is not at all born out by the actual events in the film. Miike is probably making the point that most horror films are just exercises in film-making technique these days, rather than presenting truly frightening content. Or perhaps he just fancied a way to make his latest Yakuza film a little bit different :) Miike is definitely one of the most creative film-makers working in the world today - quite possibly *the* most, given his insanely prolific output and the fact that almost every film he makes manages to be unique and memorable. Doing that with one film a year would be an impressive feat, and Miike gives us at least 3-4 such films every year. GOZU shows him on fine creative form once more, turning a story that probably isn't all that interesting into a surreal, dreamlike experience. The plot itself is very minimal, and largely irrelevant for most of the 125 minute running time. Basically, a Yakuza is told to take his yakuza-brother (Sho Aikawa) to an out of the way part of Japan and get rid of him, as he been showing signs of going a bit loopy. However, before he can carry out his orders, Aikawa disappears - and most of the rest of the film is concerned with Minami's efforts to find him. But that description really sells short the content of the film, which is really about the strange characters he encounters and the even stranger experiences that he has. Going into more detail about what happens wouldn't add a lot to this review, so I won't. Just be prepared to "go with the flow" and see what the film has to offer, rather than expecting anything specific from it. Don't expect a nice neat resolution at the end, either, 'cause you'll definitely be disappointed. Miike's films are often films that need to be seen in just the right mood to be enjoyed, and I'm glad I made the decision that my mood wasn't right when I started watching GOZU 6 months ago. The film sat there waiting for me until this weekend, when I figured the time was as good as it was going to get, and it paid off in spades :) Miike's films often suffer on repeat viewings, and I am pretty sure this will be true of GOZU - at over 2 hours it is definitely too long, and there are sure to be scenes that are a bit of a chore to sit through when you know what's coming. I couldn't say which scenes they are from a first viewing though, so there's nothing that's truly redundant in there, and I hope that the US distributors that recently acquired the film will remember that their viewers would rather make the decision themselves about any scenes that weren't needed. i.e. uncut, please!

A conflicted yakuza is ordered by his superiors to dispose of his immediate boss, who's gone insane, but when the body disappears in a strange town outside Nagoya it becomes unclear who's actually the crazy one. One of the better efforts from Miike's weird and perverted phase; calling it the Japanese ERASERHEAD may be going a little far, but it's in the ballpark.

Miike shows how skillfull and inventive he can be with Gozu, a bizarre hybrid of horror and yakuza flicks. This is not a "japanese lynch flick" it's a very unique beast that deserves it's own adjectives.