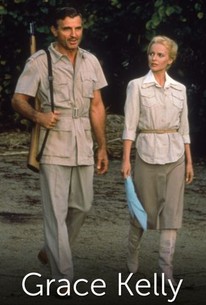 Grace Kelly, the high-society beauty who became an Oscar-winning actress and then a European princess, is the subject of this TV biopic. Cheryl Ladd has the looks and poise of the original Grace, though she isn't quite as charismatic. The early portion of the film retraces the stormy relationship between Grace and her gruff Philadelphia millionaire dad, Jack Kelly. The script suggests that Grace went through life looking for a strong father figure, finally finding one in Prince Rainier of Monaco (Ian McShane), whom she weds. Several "celebrity look-alikes" parade through the film, pretending to be the film personalities with whom Ms. Kelly worked during her brief Hollywood career. Grace Kelly tones down the darker aspects of its subject, and the film is infinitely more tasteful than most other TV biographies of the same period, even when dealing with Princess Grace's untimely death. ~ Hal Erickson, Rovi

Christina Applegate
as Grace as a Child

There are no critic reviews yet for Grace Kelly. Keep checking Rotten Tomatoes for updates!

There are no featured audience reviews yet. Click the link below to see what others say about Grace Kelly!