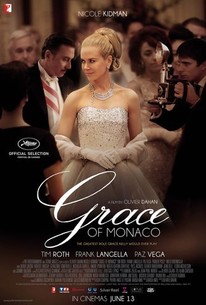 Critics Consensus: Beautifully shot but utterly vapid, Grace of Monaco fails to honor either its subject or its audience.

Critics Consensus: Beautifully shot but utterly vapid, Grace of Monaco fails to honor either its subject or its audience.

Critic Consensus: Beautifully shot but utterly vapid, Grace of Monaco fails to honor either its subject or its audience.

Zelda Rittner
as Guest of Grace and Rainier

Stéphanie Colpe
as Maid
View All

News & Interviews for Grace Of Monaco

View All Grace Of Monaco News

Critic Reviews for Grace Of Monaco

Kidman seemed a natural choice to play Kelly. She manages to soar in several scenes. Hampered by the subpar material, she seems utterly lost, unable to master what could have been the role of her career.

Not so much a turkey as a dodo, Grace of Monaco never takes flight and extinction is probably the best course for it.

This cack-handed snapshot of "Grace Kelly's greatest role" is destined to become another epithet-coining catastrophe, the benchmark by which badder-than-bad biopics will be judged in years to come.

This isn't just some middling turkey; this is a big, glistening, strutting turkey.

If you lock up your brain and throw away the key, the film is bearable.

This bubble-headed biopic exudes awfulness through its every perfumed and pampered pore.

Viewing Grace of Monaco is like learning a flock of geese is secretly living inside your local library. It just keeps honking at the wrong times, all the time.

While Kidman is certainly a big draw here, an impuissant script and a lascivious amount of obsessive close-ups distract from a performance that appears to contradict the political turmoil behind the scenes.

Like many ill-fated biopics before it, it leaves us none the wiser as to what this woman, who must have been as complex as she was fascinating, tick.

Forget austerity, Dahan wants to celebrate evening dresses and glamour: how very Cannes of him.

The whole thing feels like such a poor excuse for a film: a laughable, over-frotted tissue of pompoms and camp footmen in which a charity ball is presented as a credible diplomatic manoeuvre as well as an important plotline.

Audience Reviews for Grace Of Monaco

This fictionalized portrayal of Grace Kelly's life is a relatively absorbing character study until it finally decides to glamorize her with sacred music and a godlike back light behind her in a heavy-handed, hagiographic third act that feels terribly embarrassing.

Monaco and France in 1962 made abundantly easy.