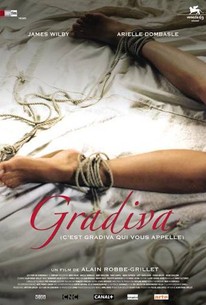 The revered and celebrated Alain Robbe-Grillet's supernatural drama C'est Gradiva qui vous appelle (AKA That is Gradiva Who Calls You) - a French-Belgian co-production - concerns John Locke, an art historian immersed in Asian research on the Marrakeshi casbah, accompanied by Belkis, his servant and mistress. Amid his studies of Eugene Delacroix, Locke repeatedly encounters a lithe, ethereal female presence in the city's medina (or Arabic quarter) who draws him seductively through the city's mazelike streets, again and again, but repeatedly vanishes. He then encounters Anatoli, a self-professed antique dealer and curator of Oriental artifacts for beginners itching for a challenge. Belkis persuades Locke to keep his distance from these individuals, but Locke blatantly ignores her admonitions and forges ahead - never quite realizing that the spirits are toying with him, and drawing him into a dead-end psychosexual black hole. ~ Nathan Southern, Rovi

There are no critic reviews yet for Gradiva (C'est Gradiva qui vous appelle). Keep checking Rotten Tomatoes for updates!

There are no featured audience reviews yet. Click the link below to see what others say about Gradiva (C'est Gradiva qui vous appelle)!