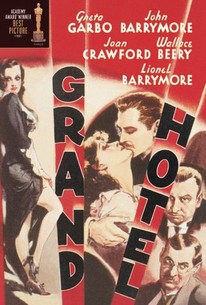 Critics Consensus: Perhaps less a true film than a series of star-studded vignettes, Grand Hotel still remains an entertaining look back at a bygone Hollywood era.

Critics Consensus: Perhaps less a true film than a series of star-studded vignettes, Grand Hotel still remains an entertaining look back at a bygone Hollywood era.

Critic Consensus: Perhaps less a true film than a series of star-studded vignettes, Grand Hotel still remains an entertaining look back at a bygone Hollywood era.

Based on Vicki Baum's novel and produced by Irving Thalberg, this film is about the lavish Grand Hotel in Berlin, a place where "nothing ever happens." That statement proves to be false, however, as the story follows an intertwining cast of characters over the course of one tumultuous day. Greta Garbo is Grusinskaya, a ballerina whose jewels are coveted by Baron von Geigern (John Barrymore), a thief who fancies Flaemmchen (Joan Crawford), a stenographer and the mistress of Preysing (Wallace Beery), businessman boss of Kringelein (Lionel Barrymore), a terminally ill bookkeeper who is under the care of alcoholic physician Dr. Otternschlag (Lewis Stone). Grand Hotel won Best Picture at the 1932 Academy Awards. ~ Matthew Tobey, Rovi

Lee Phelps
as Extra in Lobby

Bodil Rosing
as Nurse
View All

In Grand Hotel one finds the perfection of realistic acting. This was to be expected, for Metro-Goldwyn-Mayer has assembled in this production the most notable cast which has ever appeared In any one film.

Most of the players give impossibly bad performances-they chew up the camera. But if you want to see what screen glamour used to be, and what, originally, "stars" were, this is perhaps the best example of all time.

Each and every performer in the screened "Grand Hotel" does a remarkable piece of work. To us, Garbo is the supreme of magnificence.

As it is, the hotel is well filled.

Although overlong and underwhelming, it's notable as one of the first big ensemble pieces (and surely the most famous of the time).

It has presented a cast, difficult, if not impossible, to beat. Of a discreet and correct modesty, in form and substance. [Full Review in Spanish]

[Grand Hotel] may be put high up on the list of real screen achievements.

The camera movements and production values are elaborate and intriguing and engaging. There is a sense of activity, of bustle in every frame.

The star-filled melodrama that is Grand Hotel became a blueprint for almost every glossy Hollywood soap opera that followed it.

There's drama afoot in the exclusive halls of the Grand Hotel as the rich and famous cavort to their wont and pleasure. Filmed pre-code, some of yhe drama boldly crosses over into salacious territory: witness as Joan Crawford fields the age old query as to whether she like to "take dictation", and see Greta Garbo dance around in an all but sheer nightgown, heavens! There's very little subtlety here, old style written as if 3rd grade grammar school printing, but, per Thalberg undoubtedly, still a quality presentation. A must for history buffs.

The kind of wholesome production made in those days but with a fabulous constellation of stars to make it an unforgettable Hollywood classic - especially Joan Crawford and Lionel Barrymore, who are so great that they even manage to outshine the rest of the cast.

Various guests, including an aging dancer, a dying accountant, a business magnate, a beautiful stenographer, and a thief, stay at a posh German hotel. It takes a long time - perhaps twenty minutes - for this film to get started, and during that exposition I thought that director Edmund Goulding would attempt to pass off the hotel as the main character. However, once the film realizes that John Barrymore and Greta Garbo are in it, it picks up steam on the strength of the performances by these two exceptional talents. The rest of the characters and the setting find their place, and the film gives off an amiable charm. Later it turns sad, but not oppressively so. Like Nashville and other Robert Altman oeuvre, the film portrays little dramas that might amount only to a recognition of the variance of life and the mercurial nature of fate, but the later director (Altman) developed these themes more clearly and effectively. Overall, once the film is on its way, it can be charming, but it's too long a wait.

If I'm not mistaken, this is like the grandaddy of all star-studded ensemble films that features intersecting characters and storylines. The story takes place in the present day (early 1930s) at the Grand Hotel in Berlin. It's a lavish place, and, despite someone saying that is a place where "nothing ever happens" that proves to be far from the truth. when the story begins ,some of the people caught up in events going on include a destitue Baron (John Barrymore) who spends his time gambling and occasionally thieving jewels, a meek accountant (Lionel Barrymore) who, after learning he is dying decides to spend his remaining days living a life of luxury, his former employer (Wallace Beery) an industrialist at the hotel trying to close an important deal, a stenographer (Joan Crawford) who aspires ot be an actress, and a Russian Ballerina (Greta Garbo) on the verge of a complete meltdown. Here's some notable bits of info about the movie: it is so far the only film to win the Oscar for Best Picture that wasn't nominated for any other award. Also, Greta Garbo and Joan Crawford (the two biggest stars at the time)never share any screen time together as it was believed having them do so would disasterously reult in each one trying to outshine the other. If you wanna see what a classic Old Hollywood picture (and Old Hollywood royalty) look like, then give this a watch. It's a pretty good little yarn and a fine example of Class A filmmaking from that era.