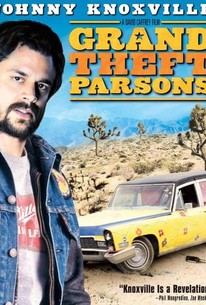 One man goes above and beyond the call of duty (and possibly the limits of the law) to give a good friend the final send-off he wanted in this comedy drama, which was inspired by a true story. Phil Kaufman (Johnny Knoxville) is a self-described "road mangler" and "executive nanny" who minds the day-to-day business of a number of rock musicians, including the man he considers his best friend, country rock pioneer Gram Parsons (Gabriel Macht). Kaufman and Parsons share a deep love of the strangely beautiful deserts of California's Joshua Tree Park, and the two made a solemn pledge that whichever man outlived the other would take his dead friend's remains to Joshua Tree and release his spirit by setting fire to the body. When Kaufman gets word that Parsons has died of a drug overdose, he hops on his motorcycle to make good on his promise, but it doesn't take long for matters to get complicated -- Barbara Mansfield (Christina Applegate), one of Gram's many ex-girlfriends, arrives claiming to have a will declaring her the heir to his estate, and she isn't about to let Kaufman get in her way, while Stanley Parsons (Robert Forster), Gram's father, simply wants to pick up his son's body and take him back to New Orleans for burial. Not about to go back on his word, Kaufman has to scramble to claim Gram's body, and is forced to enlist the aid of Larry Oster-Berg (Michael Shannon), a slightly scrambled hippie who owns a hearse. Grand Theft Parsons features a cameo appearance from the real Phil Kaufman, whose autobiography Road Mangler Deluxe provided the basis for the screenplay.

Danielle Sapia
as Girl at Inn

Betsy Rosenfeld
as Girl in Line

Shannon does a great turn as the archetypal failed hippy idealist... and while the rest of the cast are sterling rather than shining, the script and David Caffrey's tyro direction are tight enough to pull the whole vehicle along.

Inspired by a true story, pic travels down familiar genre highways, but quirky humor and an apt soundtrack make for a pleasant enough journey.

What could have served as a colorful episode in a more expansive film about the famed singer has instead become the premise of a mildly entertaining but overextended road movie that doesn't succeed on either dramatic or comedic terms.

The Phil-Larry dynamic makes up most of the movie and the strain of turning an anecdote into an demi-epic can be felt throughout the movie.

Gram Parsons' last rites were among the most extraordinary in rock history. Too bad this retelling of the singer's final adventure is so tame.

A ho-hum, meandering road movie, albeit with an extremely cool soundtrack.

Don't let Knoxville's Jackass pedigree put you off - he can be subtle as well as gross.

there are worse ways to pay respect to music legends

a sad joke without a solid punchline

What I responded to most about Grand Theft Parsons is that it tells the story without excess sentimentality...a funny, engaging movie that's worth seeking out.

Grand Theft Parsons showcases some of Parsons's songs, but ... in the end it is a tribute to a man who stayed true to his word.

A dramatically inert buddy-road picture that's too shapeless to ever click.

This should've been a great movie but it turned out to be so boing.