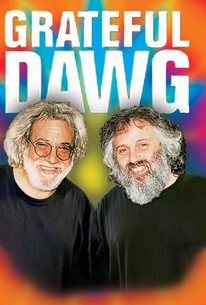 In the early '60s, David Grisman and Jerry Garcia were two bluegrass enthusiasts in their early twenties who met after they had seen each other perform. Garcia went on to lead the legendary psychedelic band the Grateful Dead, while Grisman became a world-class mandolin player who blended jazz and bluegrass into a unique style he liked to call "Dawg Music." David and Jerry never lost their enthusiasm for roots music, and in 1973 they formed a progressive bluegrass group called Old and in the Way with Peter Rowan and Vassar Clements. The group quickly gained a large following and sparked a new interest in acoustic music among rock fans, but a falling out led to their breakup after less than a year, and Grisman and Garcia didn't talk for nearly 20 years. In 1991, the pair began working together again, and resumed a fruitful collaboration that resulted in a number of new albums until Garcia's death in 1995. Grateful Dawg, directed by David's daughter Gillian Grisman, is a documentary that looks at the friendship and musical partnership between Grisman and Garcia, and includes live footage of the pair in performance, as well as interviews with a number of their friends, associates, and collaborators.

A multilayered documentary that explores music and friendship, and in its own quiet way, the battle with fame.

If you hadn't guessed already, this is a movie about the deep-reaching allure of roots music. However, the very fact that it's about the roots music performed by these two unlikely collaborators makes it something more.

If you come to Grateful Dawg to hear a lot of wonderful music, you'll walk away satisfied.

A must for any Deadhead and of genuine interest to any music fan, even if its documentary chops hit a few sour notes.

It may not be much in the way of documentary filmmaking, but for fans of Garcia, Grisman or good old-fashioned American music, it's enough to be grateful for.

This one's for Deadheads and dawg-lovers only.

It's a laid-back musical documentary featuring the lead guitarist and singer for the Grateful Dead, Jerry Garcia, and his friend, mandolin virtuoso, David Grisman.

[W]hen your subject is as interesting as this, and when the music your camera catches is this lively and toe-tapping, you don't exactly have to be a brilliant or innovative filmmaker.

To hear these guys perform Off To Sea Once More, Friend Of The Devil, Sitting Here In Limbo and several other tunes is worth the price of admission.

It's up to Grisman and his family and colleagues to speak for [Garcia]; unfortunately, their comments aren't very illuminating.

Starts to dissolve into a pleasant but overlong home movie.

A rough, unsophisticated but ultimately endearing look at another side of Jerry Garcia.

There are no featured reviews for Grateful Dawg at this time.