Grave of the Fireflies (Hotaru no haka)1988 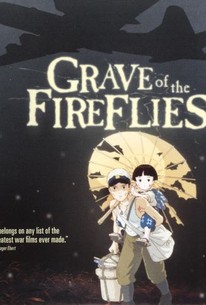 Critics Consensus: An achingly sad anti-war film, Grave of the Fireflies is one of Studio Ghibli's most profoundly beautiful, haunting works.

Critics Consensus: An achingly sad anti-war film, Grave of the Fireflies is one of Studio Ghibli's most profoundly beautiful, haunting works.

Critic Consensus: An achingly sad anti-war film, Grave of the Fireflies is one of Studio Ghibli's most profoundly beautiful, haunting works.

Grave of the Fireflies (Hotaru no haka) Videos

Grave of the Fireflies (Hotaru no haka) Photos

Grave of the Fireflies opens on an evening in 1945, after Japan's surrender at the end of World War II; and in a train station, the young Seita dies alone. The rest of the movie tells us, in flashback, how things have come to this. Seita and Setsuko are two young Japanese children growing up in the waning days of World War II. Much to Seita's pride, their father is in the Japanese navy, and they live fairly content lives in Kobe despite rationing and the other privations of war. When their mother dies from burns suffered during an American fire-bombing raid, a distant aunt takes them in -- and conflict eventually forces the children to try to survive on their own. At first, Seita and his little sister enjoy their idyllic lives in the country, but harsh reality eventually settles in as Seita begins to understand the difficulties of taking care of a young child when both food and compassion are scarce. ~ Emru Townsend, Rovi

News & Interviews for Grave of the Fireflies (Hotaru no haka)

View All Grave of the Fireflies (Hotaru no haka) News

Critic Reviews for Grave of the Fireflies (Hotaru no haka)

One of the most startling and moving animated films ever.

Isao Takahata makes survival the thematic core of the story, but he never degrades his characters or fetishizes their suffering.

Some movies are such singular achievements that they deserve to be seen at least once by everyone who considers himself or herself to be a lover of film. Grave of the Fireflies falls into that exclusive category.

Once seen, this is seared in your heart, deep as your worst relationship break-up.

We're so used to seeing the human spirit triumph. Here, we're allowed to understand how it might fail.

There are magical moments of natural beauty and childish delight, too - which only make the tragedy even more harrowing.

There is no aspect of this film that doesn't work beautifully.

It is not difficult to assume the qualification of Masterpiece that deserves one of the best films ever filmed about the war. [Full Review in Spanish]

This film isn't easy to watch but it's essential viewing among the great works of animation--or really of all film, for that matter.

...a well-made and heartfelt drama that's just not as engrossing as it should be.

Such odd hopefulness, flitting around a child, mixed with the overwhelmingly sad, pervades Isao Takahata's film. And all around Seita and Setsuko, nature, in the face of human destruction and tragedy, persists in its beauty.

Audience Reviews for Grave of the Fireflies (Hotaru no haka)

This work follows a brother and sister trying to survive in Japan near the end of WW2. It walks a very careful line as it begs sympathy for Japan (through the eyes of innocence, of children) for a war that they initiated. The close relationship between the children is certainly moving and effectively works to engage sympathy, but I couldn't help but wonder for say similar children, say of Nanking for instance. A tough watch.

A devastating animation that never holds back in its haunting depiction of the horrors of war and the people whose lives are destroyed by it, and the result simply ranks among one of the most powerful anti-war films to be ever experienced - animated or not.

One of the saddest films of all time and one of the greatest anti-war films ever created (even if it wasn't director Isao Takahata's exact intentions but that is a different discussion entirely and is irrelevant to this review). A harrowing tale of innocent children caught up in the terribly indifferent effects of wartime. This is no heroic tale of differing ideologies and factions, this is a very emotionally-taxing tale set in the waning days of WWII that will leave you feeling depressed as a brother and sister are physically and emotionally worn-away by the cold world that deprived them of their parents. Be sure to have plenty of tissues upon viewing this tear-jerking masterpiece. Can't believe this was released together with 'My Neighbor Totoro' (practically the happiest movie ever made). Talk about a bi-polar double-bill.

without question one of the saddest films i have ever seen. its films like this that have contributed so much to my near pacifism. the world is so dark, and life is so fragile, and often times its the most innocent among us that suffer the most. incredibly moving.

Grave of the Fireflies (Hotaru no haka) Quotes