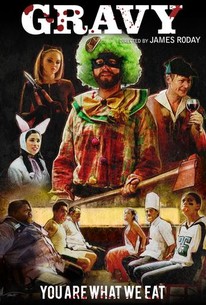 It's Halloween night. A trio of costumed misfits with very special dietary requirements invades a Mexican cantina and forces the staff to engage in a late night of gluttony. The only caveat is what's on the menu... and who will survive until morning!

Sarah Silverman
as Bethany
View All

Although a talented cast and crew keep this party lively, the lack of a point becomes a problem.

"Gravy" left a bad taste in my mouth, but for those with an eye for a potential cult film, it may be deliciously perfect.

[It] succeeds where so many other horror-comedies fail by remembering to be funny first and shocking second. Having a tasty script helps, too.

For everyone who says they want something different in the world of horror, cast your trepidations aside and take a bite. This Gravy is delicious.

Fans of cannibal movies may be satisfied enough by the buckets of blood, but cinephiles who actually want their horror movies to be good won't ask for seconds of this Gravy.

There are films like this one that are both in-your-face dumb and gross.

Falls under the weight of its own self satisfaction, eliciting a ton of flat improv, lame ad libbing, unresolved sub-plots, and a climax that goes nowhere very fast.

While it may not be a modern day EATING RAOUL, it sure is fun to watch it try.

Cannibal killers invade a Mexican restaurant and torment the staff and patrons in this broad but not particularly funny comedy/horror picture.

Much too self-consciously zany to be funny, "Gravy" is best approached as a celebration of make-up achievements.

I don't think I have much to say about this movie, it's a fairly straightforward and self-explanatory. This is quite a fun horror movie. It reminds me of The Funhouse Massacre in tone, it's clearly not meant to be taken seriously and, because of that, the film is actually quite a lot of fun to watch. It's clear that they didn't have a gigantic budget to work with, it's readily apparent from the look of the film that they didn't. But, much like Bloodsucking Bastards, it overcomes its limitations with a really good cast and a more than solid script. Perhaps one of my few complaints about the film is the fact that the film has pop culture references left and right, it's not quite Family Guy, but there's still a lot of them. And this isn't a problem in and of itself, it's knowing how to use them and I feel that they used them poorly in this film. I just felt that the references were there in a winking manner, like James Roday and Todd Harthan, both of whom wrote the film, were doing it more like as a way of showing off their geek knowledge and not necessarily because it made sense within the context of the film. There's this Six Degrees of Kevin Bacon competition, where the cannibals give one of their hostages a chance at not being tied up, or something. This is probably the only instance where constant pop culture references were to the benefit of the film. And even then, it still felt a little showoff-y. But, at the very least, it led to something that was relevant in the film and to moving the story forward. I can excuse maybe a couple of others, that I forget at the moment, but there's a lot that just feel unnecessary. But that is, realistically speaking, my only legitimate complaint about the film. It just got too cutesy with its references. But the writing of the three cannibals, I thought, was strong. Maybe that's the wrong word to use, but I thought the three were entertaining characters in their own right. None of the other characters had as much work put into them as the villains did, so they weren't as interesting. Actually, I take that back, because Yannick, the chef, was a pretty damn great character in how he would creatively insult the cannibals whenever he was able to. He was probably the most entertaining character in the entire film. The acting is quite solid as well, the casting is inspired and it definitely pays off in the final edit, because you can really them having and, again, that always adds a lot to films like this, where it's not so much necessarily about the horror as much as it is about being entertaining. And I think it achieves that purpose. It's not the best horror-comedy out there, not even close, I think the film that that this most reminded me of, Funhouse Massacre, is slightly better than this. I just feel it's better paced and it doesn't have as much down time, as it were. Not that this has much down time, but it does probably go only a little bit longer than it really needed to. I guess that's another complaint. But that's about it really, I enjoyed this movie quite a bit. It's not perfect, but it's a good enough time that I would recommend it if you ever got the chance to see it.