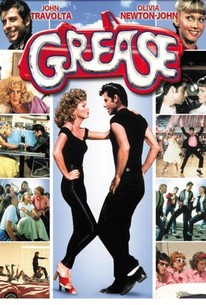 Critics Consensus: Grease is a pleasing, energetic musical with infectiously catchy songs and an ode to young love that never gets old.

Critics Consensus: Grease is a pleasing, energetic musical with infectiously catchy songs and an ode to young love that never gets old.

Critic Consensus: Grease is a pleasing, energetic musical with infectiously catchy songs and an ode to young love that never gets old.

"Grease," said the poster and the Barry Gibb song, "is the word." Transferring its setting from Chicago to sunny California, and adding a dash of disco to the ersatz '50s score, producer Allan Carr and director Randal Kleiser turned this long-running Jim Jacobs-Warren Casey Broadway smash into the biggest blockbuster of 1978. 1950s teens Danny (John Travolta) and Australian transfer Sandy (Olivia Newton-John) spend their "Summer Nights" falling in love, but once fall comes, it's back to Rydell High and its cliques. As one of the bad-boy T-Birds, Danny has to act cool for best pal Kenickie (Jeff Conaway) and their leather-clad mates Sonny (Michael Tucci) and Doody (Barry Pearl, in the role Travolta played on-stage). Despite befriending Frenchy (Didi Conn), one of the rebel Pink Ladies, virginal Sandy is "too pure to be Pink," as the Ladies' leader, Rizzo (Stockard Channing), acidly observes. Declaring their devotion in such ballads as "Hopelessly Devoted to You" and "Sandy," Sandy and Danny split, reconcile, and split again amidst a pep rally, dances, drive-ins, and a drag race, before deciding "You're the One That I Want" at the climactic carnival. With Travolta white-hot from Saturday Night Fever (1977), Grease soundtrack singles climbed the charts and summer movie crowds poured in. With the presence of Joan Blondell, Eve Arden, Sid Caesar, Edd "Kookie" Byrnes, and Frankie Avalon appealing to grown-up memories, Grease became the highest-grossing film of 1978, the highest-grossing movie musical ever, and the third most popular film of the new blockbuster '70s after Star Wars (1977) and Jaws (1975). Its sequel, Grease 2, did not exactly set the world on fire in 1982. ~ Lucia Bozzola, Rovi

Sha Na Na
as Johnny Casino and the Gamblers

Steve M. Davison
as Leader of the Scorpions
View All

Randall Kleiser's 1978 spoof of '50s iconography [is] so consciously cheesy from the outset that it hardly seems dated today.

A sugar-rush of a film.

Grease has energy and a total commitment to pleasing its audience.

Couldn't the makers of "Grease" have unearthed one person who was alive in that time, perhaps even one who attended an American high school then, and checked their information?

It has no kind of focus in atmosphere or tone, it doesn't even have a look. It's just sort of floating insult, shopping for a subject to light on.

Grease is like a co-ed St Trinians -- giggly overgrown highschool kids dancing and romping. The fifties nostalgia is a joke, a gimmick; the whole thing is shamelessly superficial.

What can I say? In the immortal words belted out by Sha-Na-Na, I guess I was born to hand jive, baby.

If you're looking for deep, meaningful music and a film that exudes character development and strong plot then I'd suggest you look elsewhere.

It's a shining example of the pieces outdoing the whole - the set designs, characters, and unforgettable soundtrack are each more impressive than the simple, generic plot.

This irresistible kitsch classic immediately has you forgiving all of its obvious flaws, including the tacking acting, silly songs and delirious dancing.

Insidiously, it congratulates its audience on having achieved a stable perspective from which it can view with amused tolerance the turbulent times of its supposed teenage traumas.

For some reason, it took me until this year to finally see this movie. most of my friends love this movie and I knew the songs so well. But I was pleasantly surprised to watch it! First, I was surprised by how un-innocent the movie was. Listening to `Summer Loving' could lead one to believe this was a simple story about 50's high school students. Whoops, it's not, it's actually a parody of that. But, that gives it a lot of amusing (adult) humor. But the most impressive thing about the movie is how energetic it is. They really don't make them like they used to. The music and dancing really gets you excited as you start tapping your feet with the rhythm. Just compare this energy to today's computer-generated films, like Star Wars Episode II! Ewan McGregor reading lines unemotionally to a CGI Yoda? YAWN... John Travolta (really) swinging Olivia Newton-John through the air? COOL! Hollywood really has lost something. 3 Stars 1-1-2001 (Updated)

This adaptation of the 1971 musical strikes the right chords and hits all the right moves. Gracefully filled with flamboyant and electrifying singing and dancing numbers along with the charm and charisma of its two young lovers (Travolta & Newton-John), Grease is the word and the film to portray young love in all its fine ways. 4/5

As original as movies come, and whose style is still mimicked to this day.