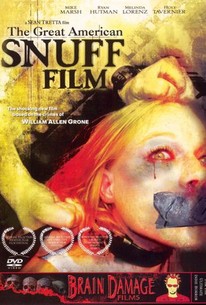 Shot like a fake documentary, Sean Tretta's The Great American Snuff Film relates the events leading up to the recovery of a "snuff" film - a movie that supposedly shows the real murder of a person. The film within the film, taken from the home of a sexual predator, is shown as well.

There are no critic reviews yet for The Great American Snuff Film. Keep checking Rotten Tomatoes for updates!

This one is a pretty sick movie. So what am I doing watching it????? It came in the Pendulum Pictures 50 Movie Pack Called Mortuary of Madness sold by Mill Creek. Story of William Grone who was a pretty sick serial killer, him and a buddy who he kills (Thanks Buddy), kidnap 2 girls and put them thru pure hell, this fill shows that. The girls had pretty easy lines, moan, scream and once in a while holler. Some say Amateurish made, but I feel that in low budget films it was well done. Mike Marsh who played Grone did a excellent job. This is for pure psycho / slasher / low budget gore film fans only. All that said I can only give the star rating I have. 2 Stars