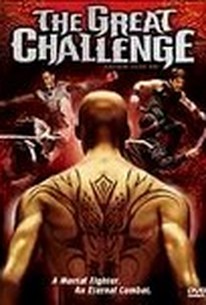 A multicultural band of acrobatic do-gooders take on gangsters of three great nations in this action-packed sequel to the French box-office smash Yamakasi. The Yamakasi are a team of crime fighters who can scale buildings and urban towers with the ease of a fly walking up the wall; after leaving their home base in Paris to set up operations in England, the men decide to set up a satellite facility in Thailand to teach their techniques to the local youth in the name of self-defense. But when major crime waves hit both London and Bangkok, the Yamakasi discover they may not be welcome everywhere they go, and when an impromptu exhibition of their skills at a building site angers a consortium of Asian and European criminals, they must face off against the British Mafia, the Japanese yakusa, and the Chinese Triads all at once. Julien Seri, who directed Yamakasi, returned to do the honors once again for this sequel. ~ Mark Deming, Rovi

Critic Reviews for The Great Challenge

There are no critic reviews yet for The Great Challenge. Keep checking Rotten Tomatoes for updates!

Audience Reviews for The Great Challenge

There are no featured audience reviews yet. Click the link below to see what others say about The Great Challenge!