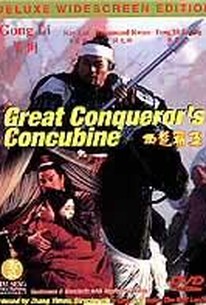 The true story of a major turning point in ancient Chinese history is presented in this epic drama covering the destruction of the Qin Dynasty in the late third century B.C. Most specifically the film focuses upon the battle between the Qin and Chu forces in the first half, and in the second it focuses upon the personal competition between the Chu leaders as they fight for control of the territory. ~ Sandra Brennan, Rovi

There are no critic reviews yet for The Great Conqueror's Concubine (King of Western Chu) (Xi chu bawang). Keep checking Rotten Tomatoes for updates!

There are no featured audience reviews yet. Click the link below to see what others say about The Great Conqueror's Concubine (King of Western Chu) (Xi chu bawang)!