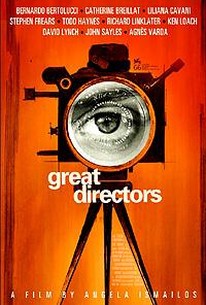 Critics Consensus: Great Directors spreads itself too thin by focusing on 10 different filmmakers, but the thin overview still provides an intriguing primer for audiences who aren't already familiar with the profession.

Critics Consensus: Great Directors spreads itself too thin by focusing on 10 different filmmakers, but the thin overview still provides an intriguing primer for audiences who aren't already familiar with the profession.

Critic Consensus: Great Directors spreads itself too thin by focusing on 10 different filmmakers, but the thin overview still provides an intriguing primer for audiences who aren't already familiar with the profession.

Ten of the world's great filmmakers discuss their art, their influences and their creative motivations in this documentary. In Great Directors, Angela Ismailos chats with a handful of talented and influential movie directors, among them Bernardo Bertolucci, Catherine Breillat, Liliana Cavani, Stephen Frears, Todd Haynes, Richard Linklater, Ken Loach, David Lynch, John Sayles, and Agnès Varda. Along with discussing the particulars of their work (often illustrated by relevant film clips), the directors also talk about artists and events that have made a lasting impact on them, films they hope to make in the future (all ten directors were still at work at the time the film was shot), issues that are important to them (creative and otherwise), and other filmmakers that they like (or hate). Ismailos' first feature film, Great Directors received its world premiere at the 2009 Venice Film Festival. ~ Mark Deming, Rovi

You'd learn more just watching one of their films.

In the end, The Great Directors is neither a manual nor a toolkit, but a miscellany that needs to be a monograph.

Though her choice of interview subjects is so random and the discourse so broad that this 2009 documentary never really arrives anywhere... it delights from start to finish and then evaporates.

A pleasing if not surprising sampler of apercus, bon mots and clips.

While I learned a lot I couldn't escape the frustrating knowledge had things been presented a bit more coherently I could have learned one heck of a lot more.

Ismailos' 10 mini-profiles might have been better used as DVD extras or a cablecast introduction to an individual director's movie. It's not too late.

This is one of the best movies ever about film directors.

It's flawed, but it beats the veiled promo films we usually get about the inner workings of cinematic creation.

A better title for Great Directors would be Good Directors Who Returned My Calls.

Standing unabashedly on the shoulders of giants, Angela Ismailos pays free-association homage to her favorite filmmakers in this engaging but scatter-shot documentary.

If she dearly loves these filmmakers, or some of their films, it's too hard to tell.

Gathering together directors from different milieus and merging their interviews into one film sounds great, but with ineffectual editing and not enough variety in your directors, what you get is this documentary. Director Angela Ismailos travelled the world interviewing directors for, what she calls, clarity in her own film endeavors. It's a very apparent vanity project, which often finds Ismailos edited into the interviews for no apparent reason, so she can give her two cents. Throughout the film I kept thinking, "Why is she onscreen? We don't care about her!" The directors she assembled were an interesting selection, including David Lynch, Todd Haynes, Liliana Cavani, Catherine Breillat, and Bernardo Bertolucci. For the length of the film, and all it covered, it would have been better to see even more directors talk about their films, or else have a narrative within the framework of the documentary to explain bigger concepts. Ismailos lets these people ramble on about aspects of their lives without a clear reason, and so it feels incoherent and dull. The interviews deal in obscurity, gender politics, New Wave cinema, and indie fare, but don't coalesce at any point. We don't learn anything about the directors as people or much about their work, only anecdotes better put to use as blurbs in an online profile in Variety.

For the record, great is too loaded a word when it comes to labeling filmmakers and is prone to cause arguments and wars. Let's just agree that the directors included in this informal documentary from Angela Ismailos are all iconoclasts, each with their own distinctive point of view. Along these same lines, the documentary is refreshingly more interested in failure than success, allowing for a clear headed discussion of politics and sex in film. If David Lynch had not failed with "Dune," then his career would have turned out very differently and the film world would be that much poorer, as he rues not having creative control on that film. The wild card here is Liliana Cavani whose films I am mostly unfamiliar with. I really liked "Ripley's Game" starring John Malkovich. Of "The Night Porter," I disagree that people disliked it because the main character is a Nazi and a villain. Rather, it is because the film is ambiguous about him in a sadomasochist kind of way. Plus, I am still not even remotely interested in seeing "The Queen." The thing to remember here is that whenever somebody says they were the first to put something on film, somebody almost always got there before them. For example, this documentary brings up a fascinating looking 1982 documentary called "Room 666" which features interviews with directors of the time and is incredibly available on DVD. Even with the newsmagazine format of "Great Directors," Ismailos would have been better off learning something from her captivating subjects and stayed behind the camera, so as not to take away any attention from them.

No disrespect to Anela Ismailos, but how could anyone interview the likes of David Lynch and John Sayles and Catherine Breillat and not have an interesting documentary?