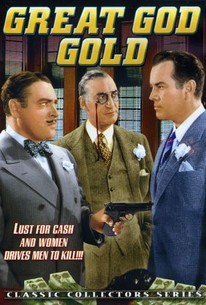 Apparently having cornered the market in white-collar crooks in 1935, Sidney Blackmer plays a shifty financier in Monogram's The Great God Gold. Blackmer is cast as John Hart, a "receivership representative" for shysters Nitto (Edwin Maxwell) and Simon (John T. Murray). Hart's present assignment is to claim the meager assets of heroine Marcia Harper (Martha Sleeper), who has unfortunately inherited her father's debts. Embittered by this, Marcia devotes her life to smashing the receivership "racket." She finds an ally in the form of reporter Phil Stuart (Regis Toomey), whose mysterious acquisition of an old Roman coin somehow helps to bring about Hart's downfall.

There are no critic reviews yet for Great God Gold. Keep checking Rotten Tomatoes for updates!

There are no featured reviews for Great God Gold at this time.