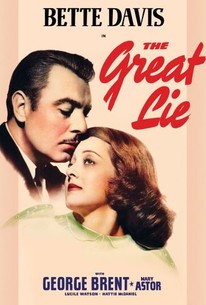 The Great Lie is Soap Opera Deluxe from Bette Davis' peak period at Warner Bros. Davis plays a socialite who is madly in love with playboy aviator George Brent. Brilliant but bitchy concert pianist Mary Astor (who won a well-deserved Academy Award for her chain-smoking histrionics) is also in love with Brent, going so far as to marry him in a secret ceremony. When it appears that the marriage may be invalid, Astor is too devoted to her art to take the necessary corrective steps, so Brent returns to Davis, who is too proud to be picked up on the rebound. While flying an important government mission, Brent disappears and is presumed killed. Davis meets Astor, who had been impregnated by Brent before the question of their marriage's validity came up. Since her first marriage had been in secret, Astor is terrified that her career will be ruined by the sudden appearance of an unexplained child, so Davis, out of love for Brent, agrees to claim the baby as her own. When Brent, who of course has not been killed after all, resurfaces, Astor demands that the child be returned to her, hoping that the child will forever bind Brent to her. Davis tells Brent the whole sad story, whereupon our long-absent hero declares his love for Davis and his willingness to give up the child to Astor. At the last moment, Astor returns the kid to Davis and Brent, and the film ends on a splendiferous musical chord courtesy of overworked Warner Bros. composer Max Steiner. In lesser hands, The Great Lie would have been outrageous hokum, but somehow Bette Davis and Mary Astor (and, to a lesser extent, George Brent) make you want to believe that the story has some resemblance to Real Life. The film was based on the novel January Heights by Polan Blanks, which was not governed by Hollywood censorship and thus didn't have to bend over backwards to "legitimize" the baby in the story.

Critic Reviews for The Great Lie

This is another in the series of intelligent, talkative pictures of which La Davis has become the patron saint.

For Mary Astor this movie has been a real resurrection, as an artist, an elegant woman, as well as a notable pianist. [Full review in Spanish]

Predictable to a fault, even Bette Davis can't save this film.

This Edmund Goulding-Bette Davis soap opera has achieved notoriety for several reasons, a presposterous plot, Mary Astor's one and only Oscar, and catfights on the set between the two ladies!

I'd be lying if I said I enjoyed this absurd sudser.

Audience Reviews for The Great Lie

Mary Astor really dominates this in an oscar winning performance but she and Bette have a good chemistry together.