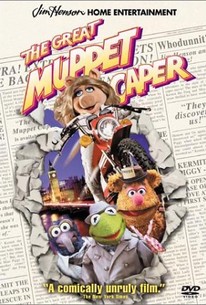 Critics Consensus: The Great Muppet Caper is overplotted and uneven, but the appealing presence of Kermit, Miss Piggy and the gang ensure that this heist flick is always breezily watchable.

Critics Consensus: The Great Muppet Caper is overplotted and uneven, but the appealing presence of Kermit, Miss Piggy and the gang ensure that this heist flick is always breezily watchable.

Critic Consensus: The Great Muppet Caper is overplotted and uneven, but the appealing presence of Kermit, Miss Piggy and the gang ensure that this heist flick is always breezily watchable.

The Great Muppet Caper is the second Muppet film and it is considerably more complex than its predecessor, The Muppet Movie, which was essentially just a road movie. As the film begins, Kermit the Frog and Fozzie Bear are reporters who have failed to bag a story of a London jewel heist, which happened under their watch. The real criminals managed to escape and frame Miss Piggy as the thief. Kermit, Fozzie and the Great Gonzo set out on a mission to solve the mystery and track down the criminals who stole the Baseball Diamond. There are fewer star cameos and songs in The Great Muppet Caper than in The Muppet Movie, although appearances from John Cleese and Charles Grodin are particularly memorable. ~ Stephen Thomas Erlewine, Rovi

Steve Whitmire
as Rizzo the Rat/Lips

Christine Nelson
as Girl in Park

Carroll Spinney
as Oscar the Grouch
View All

Like its predecessor, this film is its own best fan.

During their late-70s heyday the Muppets won huge TV audiences with their corny puns and showbiz in-jokes, but stretched to feature length the formula loses some of its snap.

The songs are routine, but the inconsequential plot leaves plenty of time for engaging asides.

We don't care about some dumb diamond the size of a baseball, and as Muppet fans we're probably also indifferent to Henson's ambition to satirize old movie genres.

The movie contains several more cheery, Disneyesque songs than are necessary, but they are made tolerable by the presence of Kermit and Miss Piggy.

While there's a lot to love in the movie, that approach kind of puts the characters at a remove and doesn't deliver the type of emotional payoffs that came in the other movies. (40th anniversary)

Instead of a story that took advantage of the richly drawn characters we'd come to know and love over, it gives us a knockabout farce that ... feels more like a lesser Bob Hope vehicle.

This is a fun little riff on the mystery/heist movie

The usual pleasures are all here, but the puppeteers seemed especially intent on giving themselves logistical challenges this time around.

Perhaps the shallowest of the three classic Muppet films... But even an imperfect Henson movie is bound to have quite a lot of charm.

Muppets in London on a retro musical robbery-romp.

That first film with the muppet crew had to be a success; this time it was more difficult. Nonetheless, the caper plot that Henson and company worked out manages to hold adult interest for quite a while.

The first Muppet movie was very focused on introducing characters and revolved around being a road movie, comedy. In this second of the Muppet films, our now established friends play various characters in a thriller concerning precious jewels being stolen from a fashion designer. Reporters Kermit and Fozzy must team up with a squadron of misfits and Miss Piggy in order to catch the culprits. The film respects its characters, but often makes a lot of in-jokes and meta references to the fact that the Muppets are playing characters, and also that Kermit and Fozzy are "identical twins" because they both wear hats. There are a lot of great musical numbers performed by the Muppets, including a water ballet routine by Miss Piggy in her true over the top fashion. The supporting actors are great, including a crotchety Charles Grodin, and an overly nice John Cleese, in a great cameo appearance. Wildly entertaining and certainly fun, the Muppets make yet enough grand old film.

Of all the Muppet movies I've seen, I enjoyed this the least. I couldn't follow the plot at some points and the story just didn't intrest me. The Muppets solving a mystery just isn't my type. But there is still funny quotes and the movie has its moments. That is why I am giving this a 60%. Funny dialogue scene: (A truck driver is pushed out of his truck and is thrown next to a trach can. A person comes out of the garbage can next to him.) Truck Driver: "What are you doing here?" Oscar the Grouch: "A very brief cameo." Truck Driver: "Me too."

A good story, but not as funny as the first movie. I liked this movie when I was a kid, but now that I see it again, it's not as good as I remembered. Anyway, it's enjoyable and kids will like it.