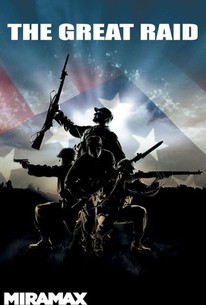 Critics Consensus: Though the climax of the film -- the actual raid -- is exciting, the rest of it is bogged down in too many subplots and runs on for too long.

Critics Consensus: Though the climax of the film -- the actual raid -- is exciting, the rest of it is bogged down in too many subplots and runs on for too long.

Critic Consensus: Though the climax of the film -- the actual raid -- is exciting, the rest of it is bogged down in too many subplots and runs on for too long.

John Dahl directed this war drama based on the true story of one of the most daring military actions of World War II. In the waning days of World War II, General Douglas MacArthur chose to make good on a pledge that he made in 1942 -- that he would return to the Philippines after he and his troops were forced to retreat. However, MacArthur's determination was more than a matter of pride. Over 500 American soldiers were being held in Cabanatuan, a notoriously brutal prisoner of war camp in the Philippines operated by the Japanese army, and MacArthur wanted to see to it that they made it home. MacArthur chose Lt. Col. Henry Mucci (Benjamin Bratt) to lead the Sixth Ranger Battalion on a mission 30 miles behind enemy lines to infiltrate Cabanatuan and liberate the American prisoners. With the help of Capt. Prince (James Franco), Mucci leads his men on a life-or-death raid against forces known for their savagery. The Great Raid was based on William B. Breuer's book The Great Raid on Cabanatuan: Rescuing the Doomed Ghosts of Bataan and Corregidor, and also stars Joseph Fiennes, Connie Nielsen, and Marton Csokas. ~ Mark Deming, Rovi

Romina Villanueva
as Informer with Hood

Bembol Roco
as Henchman No. 2

David Chamberlain
as Tank Officer No. 1

Naoto Uchida
as Tank Officer No. 2

Critic Reviews for The Great Raid

The raid on Cabanatuan is extraordinary. Exciting, tense, full of crackling suspense and filmed with old-fashioned daring, the movie comes alive with crackling electricity it does not know until this very point.

There are the makings of a fine, moving, epic war film here, but thanks to the inclusion of enough chatty exposition to sink the Bismarck, again, and some just plain silly casting choices, The Great Raid is anything but.

[S]ometimes the most worthy of stories, the most relevant of history lessons, the most rousing of plots can still become the dullest of movies.

While one might have wished for a better movie, and a few smarter decisions regarding the screenplay, generally it's a riveting, even inspirational account of an American feat of arms about which few know but about which many more should.

Feels less like a rousing action adventure than a military-sponsored lesson in invincible patriotic payback.

Dahl's approach may be somewhat pedestrian, but he tells his story clearly and with few unnecessary detours.

[The Great Raid tells] a tale of courage under fire and serving as a reminder to us all in this day and age that war is not all about smart bombs and precision aerial displays; rather, it exemplifies life, death, honor and courage.

Instead of a tribute to a fine chapter in the annals of the Greatest Generation, we have a second-rate romance right out of a cheesy, pulp fiction novel.

A well-produced, rousing feature based on one of those forgotten World War II episodes that make for great cinema.

While the historical events depicted were unusual and cause for genuine celebration, the film that depicts these events is a dull, by-the-numbers set of war-movie clichés.

It moves slowly and methodically, showing us the minutest particulars of every facet of the operation. There's more here than we need to know.

Audience Reviews for The Great Raid

Terrible, sappy, made-for-TV quality. This film is beneath the caliber of the actors in it and almost trivializes the participants in the real-life event.

Now don't get me wrong this is not Private Ryan,Schindlers list, or Bridge on the River Kwai. What the movie is is a good, true story about a small raid in the Pacific campaign. The mission is to help free 500 POW's from the Japanese before the Japanese try to kill the prisoners. It's well done, and well acted. I enjoyed it.

Although this movie has received criticism for its stereotypical and possibly xenophobic depiction of the Japanese treatment of allied POW's in the second world war, it is in fact a very accurate, fact-based retelling of the events surrounding one of the greatest morale building events for a battle weary America in the second world war. Filmed in the classic style of the WWII movies of the fifties, it is fast paced and does reflect the unfortunate attitude of the Japanese to the prisoners of war, which they held in contempt for the shame of allowing themselves to be captured. War is hell, but this fact should not detract from the history portrayed, which is accurate. The allies were ultimately the winners in the most destructive war in human history, but individual stories of heroism and courage continue to ring true to one's spirit. especially in our difficult times. Fine individual performances do justice to the real people who made in through this hellacious experience. 4/5

A stunning and triumphant action-packed adeventure. Powefrul and herioc. A truly effective story. One of the finest war films since Saving private Ryan. It's The Great Escape meets The Thin Red Line. Roushing, thrilling and exhilerating. The cast is remarkable. Benjiamin Bratt and James Franco are simply great. Joseph Fiennes is remarkable