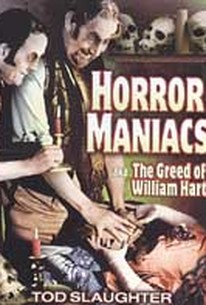 This early film treatment of the tale of Burke and Hare stars the notoriously flamboyant Tod Slaughter as the title grave-robber who, with accomplice Mr. Moore (Henry Oscar), purloins corpses from the mortuaries and graveyards of Edinburgh (and other questionable locations) for sale to the medical academy. When demand begins to exceed supply, Hart and Moore turn to the living, murdering drunks, transients and prostitutes to obtain fresh cadavers. Their plan is ultimately undone when their next victim, whom they mistake for a feeble-minded drunkard, turns out to be a well-known member of the community. Although originally filmed as a fairly loyal account of Burke and Hare's legendary exploits (titled The Crimes of Burke and Hare), the film's release was blocked by British censors, who insisted the producers remove all references to the actual grave-robbing duo. The film underwent a title change and all dialogue was re-looped to feature the alternate character names of Hart and Moore. ~ Cavett Binion, Rovi

There are no critic reviews yet for Greed of William Hart. Keep checking Rotten Tomatoes for updates!

There are no featured reviews for Greed of William Hart at this time.