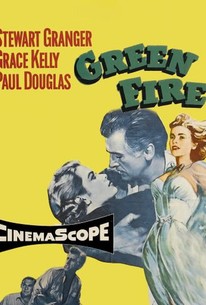 Set in the coffee fields of Colombia, Green Fires stars Stewart Granger and Grace Kelly. Granger plays emerald prospector Rian X. Mitchell, who intends to explore an old deserted mine despite the protests of his partner Vic Leonard Paul Douglas and the threat of death at the hands of local bandit El Moro Murvyn Vye. Ms. Kelly costars as Catherine Knowland, whose coffee plantation lies at the foot of the mine where Mitchell labors away. Such natural disasters as rain and flood, coupled with such man-made weapons of destruction as guns and dynamite, continually thwart Mitchell's search for riches. As the film winds down, he is forced to choose between the emeralds and Catherine. Largely filmed on location, Green Fire is good, old-fashioned Saturday matinee stuff, dressed up and prettified by MGM.

Nacho Galindo
as Off. Perez

Tina Menard
as Woman
View All

There are no critic reviews yet for Green Fire. Keep checking Rotten Tomatoes for updates!

Grace didn't make many movies, she should have made one less! Silly adventure isn't wretched nor is it very good. Her only film to lose money on original release.