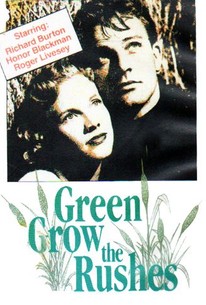 Though Green Grow the Rushes has the look and feel of an Ealing comedy, the film was actually produced through the auspices of British Lion. The story takes place on the southern coast of England, where through a bureaucratic oversight a small patch of land in Kent is protected from outside legal intervention by an ancient charter. It is here that a group of liquor smugglers, headed by Captain Biddie (Roger Livesey), carries on its activities with impunity and with full cooperation of the regional politicians. The fun begins when a cargo of precious potables ends up in a duck pond owned by a local farmer, sparking an onslaught of governmental foolishness. Two future stars carry the slim romantic subplot in Green Grow the Rushes: Honor Blackman plays a well-meaning newspaper columnist, while Richard Burton shows up as a slovenly smuggler (this was Burton's final British film before his move to Hollywood).

There are no critic reviews yet for Green Grow the Rushes. Keep checking Rotten Tomatoes for updates!

There are no featured audience reviews yet. Click the link below to see what others say about Green Grow the Rushes!