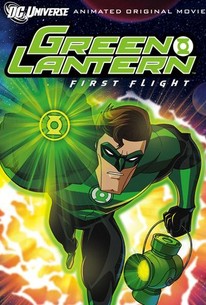 The creators of Superman: Doomsday, Batman: Gotham Knight, and Wonder Woman re-team to tell the origins of the Green Lantern in this animated DC Comics feature. When Hal Jordan (voice of Christopher Meloni) is recruited to join the Green Lantern corps, he is placed under the direct supervision of senior Lantern Sinestro. But the Green Lantern corps has come under attack by a powerful foe. When Hal discovers that Sinestro is actually part of a vast conspiracy that aims to dismantle the entire organization, he must use his newfound powers to restore order and combat the treason that threatens to tarnish the Green Lantern legacy.

John Larroquette
as Tomar Re

More interested in the villain than the hero, First Flight is a bland look at one of the sides of the DC universe that's normally much more interesting.

A literally colorful action-adventure plot...[but] fails to replicate the success of February's Wonder Woman at making its leading character not just kick-ass but fascinating. [Blu-ray]

Superhero tales are best when they strive for some complexity; this one has an engrossing plot and some solid character development that grown-ups can appreciate.

File under disappointing, but not outright bad . . .

The story's action and adventure move along at the pace you'd expect from a direct-to-video animation.

Well acted, a slick story and excellent animation make this a home DVD release worth checking out...

I had the "joy" of seeing the live-action GL movie before FF and I have to say, this is an overall improvement for sure. Which only goes to show that DC can't do live-action to save their lives without getting lucky. (Nolan on Batman) Anyway, First Flight works like a galactic, buddy-cop movie with high SciFi concepts. Overall? Solid animation and an engaging story, with a DBZ-like finale to boot! I just wish more time was spent developing/exploring Hal's character what with this being an origin movie. In fact, it might as well be named "Sinestro's fall"

What's better than cartoons on a lazy weekend morning? Been seeing previews for "Green Lantern" which comes out in June, and I'm on the fence about it. I don't know much about the character, and the movie looks pretty cheesy, so I figured I'd give this a watch and see how I liked it. It's not bad, very different from other super hero characters/movies, but has the same values(always good against evil). This is basically an origin story(as I'm sure the movie will be too), with some good twists and turns. It's on the cheesy side, but overall better than I thought beforehand. I'll warn parents(hey, I'm gonna be one soon) this has some cussing in it, not really for little kids(think it's rated PG-13). The animation is good, and the story is decent enough. Based off this cartoon, I'm more inclined to want to see the movie when it comes out, figure if my expectations remain pretty low I can't be too disappointed.

Good movie. I can now understand alot better where Green Lantern came from and I'm ready to see the new film coming up with Ryan Reynolds as Green Lantern. Christopher Meloni (TV's Law & Order: Special Victims Unit) leads the cast as the voice of Hal Jordan aka Green Lantern. The cast includes Emmy Award nominee Victor Garber (Milk, Titanic), Tricia Helfer (Battlestar Galactica) and Michael Madsen (Reservoir Dogs, Species). Produced by animation legend Bruce Timm, Green Lantern: First Flight is directed by Lauren Montgomery (Wonder Woman, Superman Doomsday) and scripted by four-time Emmy Award-winning writer Alan Burnett (The Batman). Green Lantern: First Flight finds test pilot Hal Jordan (Christopher Meloni) recruited to join the Green Lantern Corps after the death of his predecessor Abin Sur and placed under the supervision of respected senior officer Sinestro (Victor Garber). The newly recruited officer of sector 2814 soon discovers his mentor is actually the central figure in a secret conspiracy that threatens the philosophies, traditions and hierarchy of the entire Green Lantern Corps. Hal must quickly hone his newfound powers and combat the treasonous Lanterns within the ranks to maintain order in the universe. According to director Montgomery, the film will not focus on Jordan's origin story as that was previously covered in the Justice League: The New Frontier film: "...we really didn't want to spend a whole lot of time telling that same story over again. So in Green Lantern: First Flight, the origin story is over and done before the opening credits.

Green Lantern: First Flight was astoundingly great for a straight-to-video release. The animation was excellent even if the recognizable (but great all the same) voices (I kept waiting for the Law and Order chimes whenever Christopher Meloni was done speaking) seemed to take a little bit away. The story was pretty straightforward but the grittiness and not too kid-friendliness of it made up for this. It wasn't too long and it wasn't too short. I had an absolute blast watching it and actually caught myself yelling at the TV at a few points. Definitely worthwhile and highly recommended. A second watch after reading some of the current Green Lantern comics left me wanting a little more, but as an introductory origin story, great job.