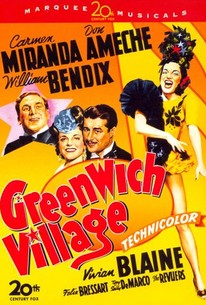 Those willing to accept Carmen Miranda as a "typical" 1920s type will be able to swallow the rest of the lavish but rather silly 20th Century-Fox musical Greenwich Village. Most of the action takes place in a New York speakeasy managed by tough guy Danny O'Mara (William Bendix). Providing entertainment in this rowdy establishment is songwriter Kenneth Harvey (Don Ameche), singing sensation Bonnie Watson (Vivian Blaine) and fortune-teller/dancer Princess Querida (Carmen Miranda). Harvey aspires to become a serious composer, while O'Mara has yearnings to produce a hit Broadway show. Everything works out to everyone's satisfaction by fadeout time, and Harvey (of course) falls in love with Bonnie. Specialty acts included the ballroom dance team of Tony and Sally De Marco, the precision-tap specialists The Four Step Brothers, and an up-and-coming group of nightclub comedians called The Revuers (Judy Holliday, Adolph Green, Betty Comden and Alvin Hammer), whose main routine, alas, ended up on the cutting room floor.

Sally De Marco
as Herself

William B. Davidson
as Dance Director

Tony De Marco
as Himself

Betty Comden
as Herself

Adolph Green
as Herself

Alvin Hammer
as Herself

Judy Holliday
as Herself

Greenwich Village is a prettv slick little musical, and it is pleasant to see that the colour experts are beginning to realise that colour can be used intelligently.

Vivian Blaine reveals herself to be an excellent artist. [Full review in Spanish]

Flashy but unmemorable musical that does contain one beautiful song "Whispering".