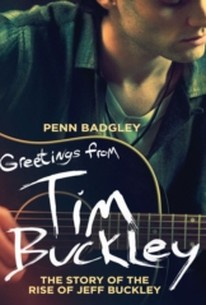 In 1991, a young musician named Jeff Buckley (Penn Badgley, "Gossip Girl," MARGIN CALL) rehearses for his public singing debut at a Brooklyn tribute concert for his father, the late folk singer Tim Buckley. Struggling with the legacy of a man he barely knew, Jeff finds solace in a relationship with an enigmatic young woman (Imogen Poots, 28 WEEKS LATER) working at the show. As they explore New York City, their adventures recall glimpses of Tim's (Ben Rosenfield) own 60s heyday, as he drives cross-country with a girlfriend and finds himself on the verge of stardom. Leading up to the now-legendary show that launched Jeff's own brilliant career, GREETINGS FROM TIM BUCKLEY is a poignant mirror portrait of father and son, two of the most beloved singer-songwriters of their generations. -- (C) Tribeca

Andrij Parekh
as Cinematographer
View All

Penn Badgley delivers a pivotal performance as the younger Buckley, coming off with just enough pretentiousness and attitude.

Algrant's desire to reunite father and son through music is admirable, but "Greetings from Tim Buckley" is too meandering and ethereal to have any lasting impact.

Badgley does a credible take on the signature falsetto that Jeff would later bring to his only album, Grace ...

The concert may have seen the reluctant birth of a second-generation rock star, but this movie, if nothing else, is a similarly suitable showcase for its own leading man.

In paying homage to two iconic performers, he's given a former small-screen star the chance to announce his own cinematic arrival.

Badgley delivers a nuanced performance of such ferocity he almost singlehandedly makes a conventional film seem loose and improvisatory.

While "Greetings from Tim Buckley" is consistently more modest, it is nonetheless bound to inspire imitators to sing the next time they pull the Buckleys' albums from shelves.

Full of songs from both Buckleys, the film, directed by Daniel Algrant, underplays the daddy-issue cliches while also staying away from a typical biopic structure- after all, it ends before Jeff Buckley even got famous.

It's a quiet movie of small rewards, made by a whole lot of talented people taking a risk and pulling it off with humble aplomb.

The atmosphere of Algrant's film is detached, as though filmed underwater, which is fitting for Buckley's mood.

an admittedly slight but resonant and lingering look at two truly singular talents - their flaws presented alongside their musical gifts - who were haunted by the presence of each other throughout their careers.