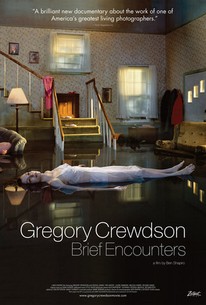 Gregory Crewdson's riveting photographs are elaborately staged, elegant narratives compressed into a single, albeit large-scale image, many of them taken at twilight, set in small towns of Western Massachusetts or meticulously recreated interior spaces, built on the kind of sound stages associated with big-budget movies. Shapiro's fascinating profile of the acclaimed artist includes stories of his Park Slope childhood (in which he tried to overhear patients of his psychologist father), his summers in the bucolic countryside (which he now imbues with a sense of dread and foreboding), and his encounter with Diane Arbus's work in 1972 at age 10. Novelists Rick Moody and Russell Banks, and fellow photographer Laurie Simmons, comment on the motivation behind their friend's haunting images. -- (C) Zeitgeist

A vigorous and knowledgeable documentary about a still photographer.

Though his work is dark, on camera at least, Crewdson is a delight.

"Brief Encounters" is a film for photography fans and a photo essay for film fans.

Shapiro's film is fascinating even if it can't possibly answer all the mysteries propelling the work of a photographer whose interest in secrets was rooted in wondering what tales were being uncovered in his psychologist father's basement office.

"Brief Encounters" is a smart, well-constructed documentary that will enthrall Crewdson fans.

Crewdson's work ultimately begins to seem less enigmatic than he is himself.

Crewdson lays his process bare, allowing for unprecedented insight into why a visionary of his caliber shares what he sees with the rest of the world.

An example of narrowcasting through and through, this documentary offering achieves a certain hold for those inclined toward psycho-social rumination.

Gregory Crewdson drives through the towns in Western Massachusetts that serve as settings for so many photos in Beneath the Roses, towns where the streets are empty and the buildings are low.

Fascinating snapshot of the artist.

Explores the life, art and working methods of Brooklyn-born photographer Gregory Crewdson, now know for painstakingly and expensively staged tableaux of homes and neighborhoods that require, in essence, a film crew to create...

Ben Shapiro shot this documentary over 10 years and not only achieves a portrait of the artist but also captures the artistic process itself, following Crewdson from initial inspiration to finished product.

There are no featured audience reviews yet. Click the link below to see what others say about Gregory Crewdson: Brief Encounters!