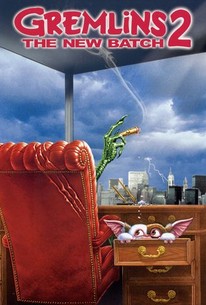 Critics Consensus: Gremlins 2 trades the spiky thrills of its predecessor for looney satire, yielding a succession of sporadically clever gags that add some flavor to a recycled plot.

Critics Consensus: Gremlins 2 trades the spiky thrills of its predecessor for looney satire, yielding a succession of sporadically clever gags that add some flavor to a recycled plot.

Critic Consensus: Gremlins 2 trades the spiky thrills of its predecessor for looney satire, yielding a succession of sporadically clever gags that add some flavor to a recycled plot.

Where the original Gremlins was a horror film spiked with comedy, Gremlins 2: The New Batch is essentially a black comedy, with a couple of horrifying touches. As the film starts, the fantastical trinket shop in Chinatown, which sold the Mogwai in the first film, is demolished by a crazed multi-media businessman called Daniel Clamp (John Glover). The heroes from the first movie, Billy (Zach Galligan) and Kate (Phoebe Cates), happen to work for Clamp in his huge high-rise. They find the Mogwai within Clamp's building, but not before he has accidentally spawned legions of mischievous, lizard-like Gremlins. Soon, the Gremlins are wreaking havoc throughout the building. In the original film, their misdeeds were violent, but here they're also goofy and satirical. Director Joe Dante has filled the film with quick verbal and visual jokes, which, for many, makes Gremlins 2: The New Batch a satire and inversion of the typical horror film. ~ Stephen Thomas Erlewine, Rovi

Sarah Lilly
as Reporter in Lobby

May Quigley
as Hallway Employee

Leonard Maltin
as Himself

Hulk Hogan
as Himself

Dick Butkus
as Himself

Bubba Smith
as Himself

'Gremlins 2'' is sloppy and inconsistent, just as it needs to be -- its bumptious, adolescent humor would wilt away if it were subjected to craftsmanship and mature reflection.

What lends it novelty and makes it such wicked fun is the change of locale from a Capra-esque small town to rude, hectic New York City.

Gremlins 2 The New Batch has so much comic energy that we overlook its lack of anything worth calling a plot.

A busy but boring sequel that spends most of its energy piling topical parody on top of product plug on top of gooey horror special effect.

Gremlins 2: The New Batch is a rarity: a sequel (again directed by Joe Dante) better than the original.

It's an infernally funny mass entertainment: the Dream Machine snapping at its own tail.

The story is essentially a duplication of the original film.

Many filmmakers throughout the years have tried to figure out how to make a live-action cartoon; Joe Dante, with this film, is the only man that got it 100% right.

An acidic look at U.S. culture. [Full Review in Spanish]

A magnificent and unapologetically fun film. [Full Review in Spanish]

The antics of the Gremlins in this sequel are truly amazing, from their sudden appearances and jump-out tactics, to nasty, premeditated shenanigans and hand-to-hand confrontations with humans.

It's... a lot of fun considering the fact it is also based on the antics of a bunch of mean little puppets.

Actually this was not bad up until the gremlins show up. I quite liked the story covering the young couple as they try to get ahead in their careers and make a life for themselves. The futuristic office was quite interesting and the awful woman played by Haviland Morris. Then Gizmo shows up and it felt like a different film and quite "kidsy". Ditto to the rest of the gremlins. I do realise I missed the point. Haha.

So freakin' stupid, and the movie knew it and tried to salvage itself by getting self-referential and ridiculous. The only really funny part was Kate starting her suicidally depressing Lincoln's Birthday story as a send-up to her most awful Christmas story in the prequel.

Aside from breaking the fourth wall multiple times, there is not really anything particularly bad about the second instalment of "Gremlins," but it just feels like the same thing, done in a bigger way. It's undeniably a very fun film to watch, but the plot is lazy and the characters are unintentionally hilarious. This time, our main characters from the original have now grown up and made a life for themselves, but as Gizmo comes back into their lives, all hell breaks loose. This feels like a children's version of "Die Hard!" I had a blast laughing at all the slapstick and the action (along with the visuals) is actually very well-produced. I can't give much credit to this film, because it seems like a rehash, but it was a very enjoyable one!