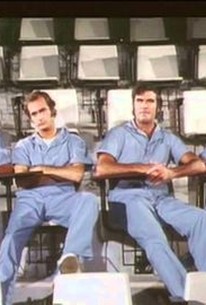 Exploitation veteran Joy N. Houck, Jr. directed this confusing Mississippi-lensed science-fiction thriller. Gil Peterson and Barbara Burgess star as doctors working at a secret, government-funded underground laboratory. Paid volunteers are broken down mentally in a sadistic series of experiments which include shock treatment and psychological torture. Cult favorite Stuart Lancaster appears as a scheming senator, and a young Gerald McRaney, Anne Latham, and James Best are among the victims. This film is primarily of interest to cult audiences, as mainstream viewers are likely to find that the minimal production values and makeshift editing undercut any impact which the story might have. ~ Robert Firsching, Rovi

Critic Reviews for The Brain Machine

There are no critic reviews yet for The Brain Machine. Keep checking Rotten Tomatoes for updates!

Audience Reviews for The Brain Machine

There are no featured audience reviews yet. Click the link below to see what others say about The Brain Machine!