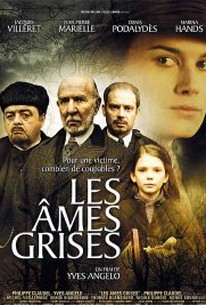 A series of tragedies befalls a small French town near the front during World War I in Yves Angelo's Grey Souls. As the film opens, the body of a young girl, Morning Beauty (Joséphine Japy) is found on the banks of the river, an apparent murder victim. We then flash back several months. Lysia (Marina Hands of The Barbarian Invasions), a pretty young woman, arrives in town to take the place of a shell-shocked schoolteacher. Because the teacher has defiled his room, Lysia moves into a small cottage on the estate of the taciturn local prosecutor, Destinat (Jean-Pierre Marielle), who has recently retired. While Lysia obsesses over her lover, who is away at the front, Destinat obsesses over Lysia, surreptitiously opening her love letters before giving them to her. Then a letter arrives that Destinat has trouble bringing himself to turn over to the lovelorn woman. The atmosphere of death and despair grows in the town. A policeman (Denis Podalydès) with a pregnant wife is routinely harassed by resentful soldiers on their way to the front. After the little girl's body is discovered, a witness comes forward who saw Destinat with her shortly before her death. But Mierck (Jacques Villeret of The Dinner Game), the vulgar, mean-spirited judge in charge of the case, and his cruel military attaché, Matziev (Franck Manzoni), seem less interested in actually solving the crime than in pinning it on some hapless lowlife. Grey Souls was scripted by Angelo and Philippe Claudel, based on Claudel's novel. The pair had previously collaborated on Sur le Bout des Doigts. Grey Souls was shown by the Film Society of Lincoln Center as part of their Rendez-Vous with French Cinema in 2006. ~ Josh Ralske, Rovi

Quietly but surely defies expectations at every turn and does not once hit a false note in the process. One of the best films of the year.

There are no featured reviews for Grey Souls (Les Ames grises) at this time.