Greystoke: The Legend of Tarzan, Lord of the Apes1984 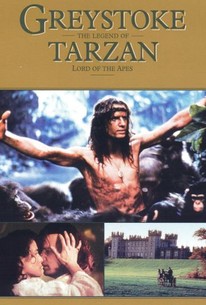 Greystoke: The Legend of Tarzan, Lord of the Apes Photos

Greystoke: The Legend of Tarzan, Lord of the Apes is a reverent retelling of the Edgar Rice Burroughs original, with a 1980s-sensibilities slant. Shipwrecked on the coast of Africa, Lord Jack Clayton (Paul Geoffrey) and his pregnant wife Lady Alice (Cheryl Campbell) attempt to survive in the hostile environment, but both die shortly after the birth of their son John. Abandoned in the wilderness, the orphaned John is adopted by a family of rather highly evolved apes, and raised as one of their own. Years later, John-now known as Tarzan, and now played by Christopher Lambert-comes across a party of white hunters. Rescuing one of the intruders, Belgian Captain Phillipe D'Arnot (Ian Holm) from a horrible death , Tarzan is taught to speak English by the grateful D'Arnot. Coming across the remains and possessions of Tarzan's parents, D'Arnot discovers that the Lord of the Jungle is actually the Earl of Greystoke. Brought back to England, Tarzan is introduced to society, where his crude, apelike manners offend everyone--except the likeable (and painfully senile) 6th Lord of Greystoke (Ralph Richardson, in his final film role) and Greystoke's American ward, Jane Porter (Andie McDowell, whose Southern-fried voice is dubbed by Glenn Close). Disturbed at the notion of Tarzan's inheriting Greystoke manner, his more greedy relatives begin plotting against him. But it is Tarzan himself who decides that he cannot adapt himself to England-especially after a painful reunion with his ape foster father, imprisoned in a science-lab cage.

Critic Reviews for Greystoke: The Legend of Tarzan, Lord of the Apes

'Greystoke' is one of the most thoroughly enjoyable films of its kind I've ever seen.

An odd and attractive adventure, with a notable ability to to fictionalize at the same time that it's concerned with historical reconstruction. [Full Review in Spanish]

The beauty with which John Alcott photographs the African natural landscapes and the extraordinary personality displayed by John Scott in the composition of the soundtrack that makes the film stay in the cinematic memory. [Full Review in Spanish]

For all its flaws, Greystoke is still better than the romanticized live-action versions of Tarzan that Hollywood has produced.

As long as they stay in the jungle, this Tarzan may be one of the very best versions of the character you're likely to see.

Beautiful. A real view of an ape man clashing with the civilization.

It's a different approach and will not satisfy viewers intent on seeing thrilling fights and derring-do.

Hugh Hudson has fashioned a visually resplendent film that, while perhaps a bit too rigid to offer the proper degree of high adventure synonymous with the Tarzan trademark, contains no small measure of compelling sequences and strong performances.

one of cinema's great disasters

Audience Reviews for Greystoke: The Legend of Tarzan, Lord of the Apes

Ralph Richardson and Ian Holm do a great deal to lend credence to and carry this bit of a different take on the ape-man story. More time is spent re-socializing the brute king than the popular 1930's jungle adventure tales, basing the thing more in the civilized world of 19th century England. Lambert does well, but the initial primal draw of the savage innocent at home with Nature story is missed with the emphasis on stuffed shirt society. Ultimately this is good storytelling, but it misses the zing of the older material.

We all know the background to Tarzan. I liked the visual aspects of the movie (great apes), but didn't like the Scottish noble life as much.

Quite an entertaining live action Tarzan film. One more for the kids though.

A great film with equally great scenery. Greystoke has become awefully forgotten, despite the fact that it's miles better than director Hugh Hudson's very overpraised( and multi-oscar winning) Chariots of Fire.

Greystoke: The Legend of Tarzan, Lord of the Apes Quotes