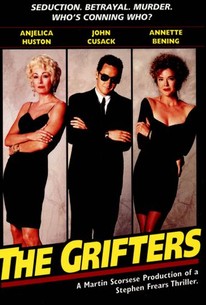 Critics Consensus: Coolly collected and confidently performed, The Grifters is a stylish caper that puts the artistry in con.

Critics Consensus: Coolly collected and confidently performed, The Grifters is a stylish caper that puts the artistry in con.

Critic Consensus: Coolly collected and confidently performed, The Grifters is a stylish caper that puts the artistry in con.

Director Stephen Frears' tense adaptation of Jim Thompson's novel The Grifters was one of a number of revival film noirs in the first half of the '90s. Updating the setting to contemporary Los Angeles, the film follows a trio of con artists who are intent on out-foxing each other. Roy Dillon (John Cusack) is a simple, two-bit con, whose life is thrown into turmoil when his estranged mother Lilly (Anjelica Huston) returns home in an attempt to evade the law. Lilly doesn't warm to Roy's girlfriend Myra Langtry (Annette Bening), who is too similar to herself. Soon, the two women are competing for Roy in a battle that is more of a power struggle than a pursuit of affection, and the battle quickly turns dangerous. Huston was nominated for an Academy Award for her work.

Jan Munroe
as Guy at Bar

Critic Reviews for The Grifters

Best to savor The Grifters for its handsome design -- the picture looks as clean as a Hockney landscape -- and its juicy performances.

A mannerist thriller that doesn't begin to work despite the number of talented hands involved.

Cusack underplays Roy, making him an unbelievable wiseguy, a colorless cipher too akin to the saps he loves to fleece.

Donald Westlake's excellent screenplay does some justice to the starkness of Jim Thompson's novel; and Frears' direction never fails to grab the attention.

The Grifters is so good that one leaves the theater on a spellbound high.

There's little doubt that The Grifters ultimately fares quite a bit better than its literary predecessor...

[VIDEO] Although the movie recalls films by the Coen Brothers or the Dahl Brothers, "The Grifters" retains its source material's voice in a thoroughly original way. Here's a neo-noir you can never see too many times.

A darkly cynical and uncompromising gem.

Clever writing and fine cast make this tale of thieves among us fun to watch.

Audience Reviews for The Grifters

A first-rate neo-noir that benefits from superb performances (especially Anjelica Huston and Annette Bening); an excellent, dark script; a fantastic score by master Elmer Bernstein; and Stephen Frears' exquisite direction at the helm of one of the most gripping films of his career.

A young con artist learns the hard way that relationship problems cannot be solved with money. And there's a crapload of money here on display. Every time you look somebody is reaching into a bag to pull out stacks of green. Stacks of green laying around like a Halloween candy grab. And while Cusack and Bening are okay in this, make no mistake this is Anjelica Huston's movie. The best scene is between her and Pat Hingle, who can pull off psycho/wackjob with the best of them.

A forgettable outing from one of my favourite directors, unfortunately. Annette Bening is a sparkplug, Angelica Huston is electric, and the final act is a knockout. Unfortunately, the film bounces around for the first hour or more, in a way that, instead of building intrigue, is jarring and kind of confusing. Every time you think you understand what's happening with a character, the film cuts away and focuses elsewhere. It's not the three way chase that has been mastered elsewhere (see: No Country for Old Men), it's just a rote series of flashes. This film could easily have been 20 minutes shorter. But, to its credit, most of the threads dropped in the wandering earlier portion are picked up in the end, and the final half hour is gripping. Definitely an immature film from Frears, and one that was probably over-rated due to its adhesion to that weird early 90s neo-noir thing (see: Basic Instinct, Fatal Attraction, etc.). If you turned it off before getting to the ending, I won't hold it against you.

This is my semi-strange parallel: I see this film as a depraved, con man version of My Cousin Vinny. It's regional, it's tricky, and it's female character driven, even though the protagonist in each is ostensibly the male. But I think it's mostly because Annette Bening's character reminds me a lot of Marisa Tomei's, body hugging dress and all.